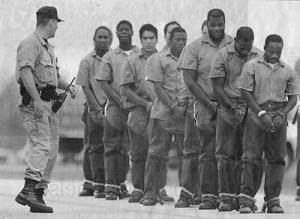 Three weeks ago inmates at prisons across the state of Georgia staged an unprecedented protest, organized with the help of smuggled cell phones and text messages, demanding that they be provided basic necessities like heat and vegetables, as well as greater educational opportunities and access to their families.

Georgia imprisons more than 53,000 men and women, making it the eighth most incarcerated state in the U.S. on a per capita basis. And while some no doubt deserve to be separated from society, a plurality are imprisoned not for crimes like rape or murder, but for nonviolent drug offenses.

And as a delegation of officials from the ACLU and NAACP discovered when they met with some of the protesting prisoners last week, many of those behind bars for victimless crimes reported that they are often denied visitation with their loved ones and forced to pay for their own medications, despite the fact that they are not paid a cent for their labor. Inmates also say prisoners are routinely and unjustifiably denied parole, while suffering constant abuse at the hands of guards.

Speaking to Change.org, one inmate, who requested anonymity for fear of retribution, said the protest – which entailed prisoners engaging in a work stoppage and refusing to leave their cells – has had a discernible impact, resulting in some minor but welcome improvements in conditions.

Housed at Telfair State Prison, an 1,160-bed facility in the center of the state, the prisoner says that after officials stopped their lock-down of the facility, “they immediately gave almost double portions on food trays.” They also stopped conducting the “everyday military-style inspection” of cells they engaged in prior to the protest, and “delivered commissary on time” for a change.

In addition, “The verbal abuse from staff has subsided some,” and prisoners are finally being provided adequate heat as outside temperatures inch closer to single digits.

The most dramatic difference, though, can perhaps be seen among the inmate population itself. While prisons are notoriously divided along racial lines, the inmate tells Change.org that right now “ethnicity is not a factor, although there is always an idiot in every bunch. But for the majority there is unity.” Prior to the protest, interracial strife was widespread, with “multiple racial stabbings weekly." Now attacks between the races have fallen to “almost nil.”

But unless conditions substantially improve, the inmate warns unrest could spill over into violence – which he notes is exactly what prison officials are hoping for, as it would immediately discredit the inmates' cause. But many prisoners, he says, “are young and have a lot of time on their hands, and they are truly uneducated [regarding] just how monstrous these people can be …. [whereas] I know that they are waiting for violence to occur.”

“However, those of us in leadership are holding them at bay.”

But there's only so much those who are already incarcerated can do to improve their conditions. Ensuring those behind bars are treated with dignity – which is not only morally right, but pragmatically wise in terms of reducing recidivism – requires that those on the outside ditch their indifference for activism.

And that activism need not be limited to contacting politicians and prison wardens -- it can, and should, extend to reaching out to prisoners themselves. As one incarcerated man, Johnnie Jones, recounted in a recent piece on the website Behind the Bars, which publishes letters and poems from prisoners, doing so can make all the difference in a convict's life.

"I have witnessed hardcore men cry like [babies] when shown kindness,” Jones wrote, describing a program where inmates are provided letters and drawings sent to them by school children. “Not one man in that program did not cry after reading the words of [encouragement] from those kids .... kindness and love are the two most important things that a convict needs in his [rehabilitation] process. He needs to know that someone loves him.”

In addition to writing inmates and calling prison officials – Change.org's Wendy Jason has provided a list of their phone numbers – those who wish to express their solidarity with Georgia's incarcerated men and women and their desire to see them rehabilitated, not dehumanized, can send a letter to officials with the Georgia Department of Corrections.

But will that really make a difference, one wonders – does outside lobbying and activism from concerned citizens really matter? “More than you could ever begin to fathom,” the Georgia inmate tells Change.org. “I would like [your readers] to know that many of us in this environment are still moral human beings,” he adds. “However, there is only so much we can do from in here.”

Democracy and Class Struggle presents some videos which report on the recent prison struggle in US followed by some of the writings of Kevin Rashid Johnson on the current US Prison System.

There has been limited coverage of the current US prison struggle not only in the bourgeois press but also on the Left which reflects a political weakness that needs to be rectified has this is an important frontline of struggle.

We see the spirit of comrade George Jackson in this current phase of struggle in the US prisons see his 1971 interview on prison struggle here :