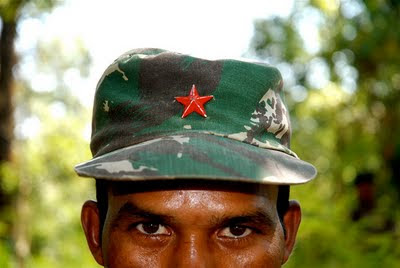 On behalf of our Party, the CPI (Maoist), People’s Liberation Guerilla Army (PLGA), Revolutionary People’s Committees (RPCs), revolutionary mass organizations and revolutionary people of India, firstly, we send our heartfelt Laal Salaam (Red Salutes) to all the parties, organizations, various forums and individuals from India and abroad, who had sent condolence messages to our CC and who had condemned the brutal murders of comrades Cherukuri Rajkumar (Azad) and Hemchand Pandey on July 1, 2010 by the fascist Indian ruling classes. As all of you have acknowledged, losing comrade Azad is one of the biggest blows our party and Indian revolution had suffered. Azad was one of the topmost leaders in our party. He has been leading the Indian revolution since a long time. In our country, People’s War is intensifying with each passing day.

With the aid and support of imperialists, particularly the American imperialists, the Indian reactionary ruling classes are trying to suppress the revolutionary movement and are carrying on ruthless atrocities in an unprecedented severe manner. In this war between the people and the ruling classes, the enemy had particularly schemed to murder our leaders and concentrated on comrades like Azad who are leading the revolution. It is as part of that conspiracy that comrade Azad was caught and killed in the most brutal and cowardly manner. Comrade Azad was leading the entire urban movement on behalf of our Central Committee and was also looking after political propaganda, party periodicals, party education and other such crucial responsibilities. He was a most experienced and popular mass leader. He maintained close relations with many comrades at various levels and with the revolutionary masses. In the midst of severe repression, he worked selflessly and unflinchingly in spite of the many risks involved. It is under such circumstances that the enemy came to know about his whereabouts somewhere and could catch him by laying in wait.

Your messages and condemnations released in the true internationalist spirit had given the necessary moral support to the oppressed peoples and the comrades who were grief-stricken with this shocking news. Due to the severe repressive conditions here, we could not receive all the messages and even the messages we received had reached us very late. Hence we feel very sorry for this delay in sending you a reply
.

Comrade Azad was attracted to the revolutionary movement while he was studying in the Warangal Regional Engineering College in 1972. Azad who was exceptionally brilliant in his studies had played a dynamic role in the revolutionary movement too. He played a role in the formation of the Radical Students Union (RSU) in 1974. He was elected as the state president of RSU in 1978. He was one of the founders of the All India revolutionary student’s movement and guided it from its inception in 1985. He played a key role in conducting a seminar on Nationality Question in the then Madras city in 1981. Later he took up the responsibility of building the revolutionary movement in Karnataka and build up the Maoist party in this State for the first time. He attracted many comrades like Saketh Rajan into the party. When opportunistic elements tried to split the party in 1985 and in 1991, comrade Azad had played a crucial role in defending party line and keeping it united and strong enough in defeating their opportunist politics. He worked tirelessly for twenty years as a CC member and Politburo member from 1990 till now. We cannot separate Azad’s life from the history of revolutionary movement of the past forty years. Particularly, he played a key role in the ideological, political spheres, party education and running of periodicals. He fulfilled the responsibility of the party spokesperson since three years as ‘Azad’ in the most excellent and exemplary manner. He used his intellect and sharp pen outstandingly in fighting back the ‘War on People’ led by the Manmohan Singh-Sonia-Chidambaram gang. He stood as the powerful voice of the people against the rulers and exploiters. In the development of the party’s political line, in the development of the party, people’s army and mass organizations, in expanding the movement, in the emergence of new democratic power organs and in all the victories won, Azad’s ideological, political work and practice played a key role. Unflinching commitment in face of any odds and during the ebb and flow of the movement, great sacrificing nature, selflessness,simple living, indefatigable work for the revolution and for the interests of the people, astounding study, study of changing phenomena in the society from time to time, being with the people always are some of the great proletarian ideals established by Comrade Azad. Though he is no more, it is undeniable that he would serve as a revolutionary role model to every revolutionary and particularly to the youth, students and intellectuals.

Hemchand Pandey was a progressive free lance journalist from Uttarakhand who had used his pen to bring to light the plight of the poor oppressed people of our country. He was killed as he could bring out the truth behind Azad’s murder. The brutal murder of this pro-people young budding intellectual is just another instance of the callousness of the fascists.

You have rightly condemned these ghastly murders by exposing the conspiracy of the Indian ruling classes in killing Azad, which is to crush the ever expanding revolutionary movement under the leadership of CPI (Maoist) and to render the people and party leaderless. Azad’s murder is the latest one in a series of such murders of our leaders carried out in the name of ‘encounters’ for the past 40 years and especially since the successful completion of our Unity Congress-9th Congress in 2007. The government had declared CPI (Maoist) to be the biggest internal security threat and launched many suppression campaigns to crush the movement, the latest being Operation Green Hunt, launched in mid-2009. This is the biggest offensive launched on the revolutionary movement in India so far and it has resulted in unprecedented destruction of lives and property of the people. Extra-judicial killings of leaders and massacres of people are all part of this counterrevolutionary multi-pronged offensive.

All of you had condemned this war on Indian people, particularly on the adivasis, with right indignation and demanded that it be immediately stopped. The people of revolutionary movement areas warmly remember this international solidarity expressed by various parties, organizations, individuals and the proletariat of various countries as this is exactly the kind of support which must be extended to any genuine movement of the people when it faces such fascist onslaught. We very much appreciate this kind of support and solidarity and firmly assert that we will reciprocate the same towards other fighting masses in various parts of the globe. This kind of solidarity infuses great confidence and reassurance among the fighting people that there are not alone in their fight. It also points sharply one more time towards the common enemies we all are facing, namely imperialism and all kinds of reactionaries. It enhances the fighting spirit of the people and helps them to advance the movement firmly. Our party, PLGA, RPCs, Revolutionary Mass organizations, revolutionary people and all progressive and democratic forces of our country exactly wish for such unity and solidarity at the domestic and international scale. This is extremely important to defend the people’s movement and to advance it

We once again pledge before all of you that we would carry on the lofty aims of all great martyrs of the world proletarian revolution including Comrade Azad and announce that no amount of fascist repression can subdue the fighting spirit of our Party and the revolutionary people of India. We will march forward with renewed determination braving all kinds of odds and making sacrifices till the final victory. This is our promise to all the friends and well-wishers of Indian revolution.

LONG LIVE PROLETARIAN INTERNATIONALISM!
LONG LIVE THE UNITY OF INTERNATIONAL PROLETARIAT, REVOLUTIONARY AND DEMOCRATIC FORCES AND THE OPPRESSED NATIONS AND PEOPLES ALL OVER THE WORLD!