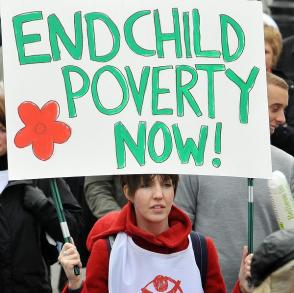 Institute of Fiscal Studies analysis shows that government programme will push 200,000 into penury

The government's radical programme to slash spending will see the first rise in absolute child poverty for 15 years, with almost 200,000 children pushed into penury, according to an analysis by the Institute of Fiscal Studies.

Tax changes introduced by the coalition government will, the leading independent fiscal thinktank finds, increase absolute poverty by 200,000 children and 200,000 working-age adults in 2012-13.

Cuts to housing benefit alone will force a further 100,000 children into poverty.

In the next three years the IFS says average incomes are forecast to stagnate and this, coupled with deep cuts in welfare, will see a rise in relative poverty for children and working-age adults of 800,000 and a rise in absolute poverty for the same group of 900,000.

The institute directly challenges the government's claim that the impact of the budget would have no effect on child poverty.

Sally Copley, head of UK policy at Save the Children, said: "George Osborne promised in his spending review that child poverty would not get worse over the next two years. These new figures show the government will meet this commitment.

"But standing still on child poverty is never good enough and the prospect of it actually rising after 2012 is totally unacceptable."

Robert Joyce, a research economist and an author of the report, said: "We find that the coalition government's measures act to increase poverty among these groups slightly in 2012–13, and more clearly in 2013–14. Meeting the legally binding child poverty targets in 2020 would require the biggest fall in relative child poverty after 2013–14 since at least 1961."

Campaigners said the work sounded "an alarm on a future crisis".

"It is a reversal of fortune for the poor. The coalition have said that the increases in child tax credits will help but that's sticking plaster," said Goulden.