USA: Push back by General McMaster who says terrorists are un Islamic 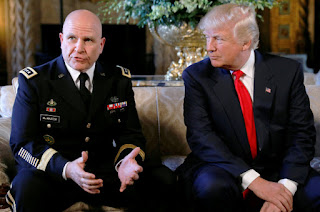 Democracy and Class Struggle says General McMaster represents push back against the Apocalyptic Bannon view of Islam as the enemy.

This professional army man seems to be one of few rational elements in Trump Administration - so how long can he last ?


President Trump’s newly appointed national security adviser on Thursday reportedly held his first “all hands” staff meeting where he said labels like “radical Islamic terrorism” are not helpful because he said terrorists are “un-Islamic.”

The New York Times, citing people who attended the National Security Council meeting, reported that Lt. Gen. H.R. McMaster was in his Army uniform at the time and it represents a break from the opinion of other senior advisers.

Peter R. Mansoor, a retired Army colonel who served with McMaster in Iraq during the 2007 surge of U.S. troops, said earlier that McMaster “absolutely does not view Islam as the enemy.”

“So I think he will present a degree of pushback against the theories being propounded in the White House that this is a clash of civilizations and needs to be treated as such,” he said.

The national security adviser has a special role within the government, working directly with the president but not subject to confirmation by the Senate. McMaster will advise Trump and serve as his coordinator of foreign and defense policy.