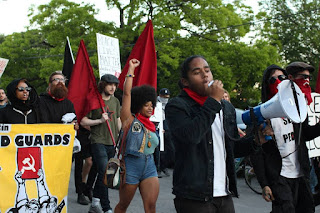 Tonight a very important leader of the movement in Austin has been targeted by the pigs and framed on felony charges. This is the second time since November that the pigs have charged a local organizer with assault with a deadly weapon, a second-degree felony. These charges are false but carry serious prison time. In the era of Trump and rising fascist populism a black woman has been singled out and targeted by the pigs.

The people and revolutionaries rushed to her defense and took the brunt of batons and pepper spray and were run over with bicycles all at the hands of the pigs. While one of us sits in the dungeons of the racist oppressor none of us feel free. It is our goal to raise hell and fight tirelessly for this comrade. She is a longtime revolutionary organizer and fighter for the people, a dedicated antifascist who has fiercely defended and stood by all of Austin’s radical left.

Those of us who have had the pleasure to serve alongside her have only one driving thought: FREE OUR COMRADE. Revolutionaries converged on the jail to demand her release and have launched a fundraiser to go toward organizing for her defense.

Since the Austin Police Department has entered the Trump era, their low-intensity warfare strategy has been abandoned and they have used increased levels of violence on revolutionaries and the masses of people. Youth from the projects came out bravely in her defense and fought the pigs but were not able to liberate her from the enemy. Now your help is needed.

We call all supporters and all comrades to please give to this cause. Please know that while we intend to write a summation and analysis of today’s anti-gentrification march and ongoing anti-ICE resistance, for now, time is of the essence, and we must not let her sit in the clutches of the enemy. While we and other revolutionaries are prepared to pay the price in our own blood, so too are we ready to fight, and we refuse to take these arrests with the bourgeois docility which this system promotes.

Communists are fighters, and this movement is only as good as its support for its political prisoners.

Even in this moment the masses in North Austin are rebelling heroically against ICE raids, and our best are beside them, facing more targeted arrest and violent attacks. We need those who are with us in the spirit of fighting to help spread this statement.

Defend Our Hoodz called upon the people to rebel against the gentrifying scum and the fascist neo-Nazis who back them. More than ever we stand firmly behind this cause and will fight the right without mercy.

Fuck gentrification, fight ICE with fire, and death to fascism. The pigs can beat us, arrest us, and even kill us, but every single time they take one of us three more rise to take on their work and our fighting spirit only gets stronger. We burn with righteous hatred for all enemies of the people.

Please contribute to our fundraiser and share it widely:
http://fnd.us/f1CyU4?ref=sh_16Szs4