Hassan Nasrallah has warned against the threats posed to Lebanon by Israel, calling for the removal of the regime's Dimona nuclear reactor. 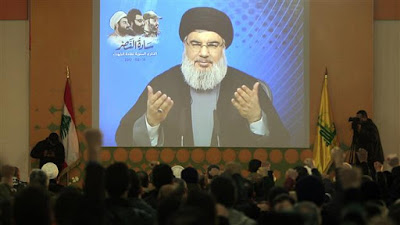 At Democracy and Class Struggle we have watched the pantomine performance of Trump and Netanyahu in Washington - Hassan Nasrallah offers serious analysis of the implications of their meeting even if some aspects of Trump's policies are not yet clear - it is clear enough that negotiations are dead.


Hezbollah Secretary-General Sayyed Hassan Nasrallah has warned against the threats posed to Lebanon by Israel, calling for the removal of the regime's Dimona nuclear reactor.

He made the comments during a ceremony commemorating the martyrs of the Lebanese resistance movement as well as the national army.

Touching on the inauguration in January of US President Donald Trump, a staunch supporter of Tel Aviv, Nasarllah said the new leader in the White House might allow or encourage Israel to launch a new war against Lebanon.

However, he said, Trump’s Middle East policies are still not clear given the struggles and changes inside his cabinet.

He stressed that the resistance movement has no fear of enemies as its power base lies in the popular support it has inside Lebanon as well as the strong stance of Lebanese President Michel Aoun.

The Hezbollah chief said Tel Aviv once took our warning seriously and scrambled to “empty out its Ammonia tank after our threat to target it, but we’ll reach it out wherever they take it to.”

“I call upon Israel not only to evacuate the Ammonia tank from Haifa, but also to dismantle Dimona nuclear facility,” Nasrallah was quoted as saying by the website of the al-Manar television.

He warned that Israel would be “surprised by what we are hiding which would change the course of any war.”

The Hezbollah head further pointed to a meeting between Trump and Israeli Prime Minister Benjamin Netanyahu in Washington earlier this week, saying the outcome of their talks signaled an end to the negotiations on the Israeli-Palestinian conflict, the last round of which broke down in 2014.

“After what came out after the meeting between Netanyahu and Trump, I am not exaggerating if I say that yesterday there was a semi-official announcement of the death of the path of negotiations,” Nasrallah said.

Speaking alongside Netanyahu on Wednesday, Trump ditched Washington’s decades-long policy of supporting a so-called two-state solution to the conflict between Palestinians and Israelis.

“So I’m looking at two states and one state,” he said. “And I like the one that both parties like,” said the US president, in comments that elicited strong criticisms from both the Palestinian officials and the international community, including the UN and the Arab League.

A “two-state solution” would see the establishment of a sovereign Palestinian state within pre-1967 borders in the West Bank, Gaza Strip and East Jerusalem al-Quds, living peacefully alongside Israel.

The Hezbollah leader further said the so-called two-state solution was “meaningless to us,” but it was the only hope left amid efforts to revive the conflict resolution talks between Israelis and Palestinians.

Nasrallah also addressed the recent protest rallies in Bahrain marking the anniversary of its 2011 upspring against the ruling Al Khalifah family, censuring the regime in Manama for calling in Saudi troops to ruthlessly crack down on the protesters and political activists.

“Bahrain today is an occupied country by the Saudi forces,” who are “killing the Bahraini people,” the Hezbollah chief added.

The executions sparked large anti-regime demonstrations in the kingdom, with the international community and prominent rights groups.

Back then, Hezbollah had said in a statement that the Bahraini regime and its Arab and Western supporters were responsible for this crime.

Elsewhere in his remarks, Nasrallah hailed the Yemeni nation for keeping up its resistance against the Saudi aggression, saying the Yemenis prevented Riyadh and its allies from achieving their goals of war.

The Saudis and their allies imagined they could end the military campaign “in only weeks,” but they were “mistaken,” he added.

The Hezbollah chief deplored the United States and Israel for supporting the Saudi war against Yemen, saying Washington and Tel Aviv are complicit in Riyadh’s crimes

Riyadh, along with a number of its allies, has been engaged in a deadly war against Yemen since March 2015 with the aim of reinstalling the former Yemeni government, a close Riyadh ally.

However, the campaign has been met with stiff resistance from Yemeni armed forces, including the Houthi Ansarullah fighters, army troops and popular forces.

So far, some 11,400 people have lost their lives in the war on Yemen, according to the latest tallies.

The Hezbollah leader further said Saudi Arabia has created the Takfiri Daesh (ISIL) terror group, stressing that the Al Saud regime is responsible for hundreds of thousands of deaths in the areas where the extremist terrorists are active, including Iraq, Syria and Egypt’s Sinai Peninsula
Posted by nickglais on 2/16/2017 10:49:00 AM