Fidel Castro Ruz : His legacy and his historical significance By Jesus Rojas 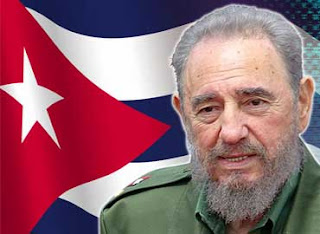 This article reflects the personal views of Jesus Rojas


The world is marking the death of clearly one of the most controversial figures in geopolitics of the 20th century. When such figures are mentioned, they are generally heads of dominant states that changed the course of history through foreign policy engagements, and conflict action—whether it be war, peace or détente. Names like Roosevelt and Stalin, Kennedy and Khrushchev, Reagan and Gorbachev, Mandela and Botha. But only one spanned the course of five decades and changed how all western nations would relate to the eastern nations in the context of class revolution. And he would be known by one name. Fidel.

This extraordinary man was an authentic revolutionary, an anti- imperialist, one of the most remarkable political figure of his age. Castro belonged in the company of Ho Chi Min, Mao Tse Tung, Nasser and Nehru, as an embodiment of 20th century nationalism.

His political hero was not Lenin, but Jose Marti the 19th century fighter for Cuba`s independence from Spain. For Cuban poet Nicolas Guillen, there was a direct link between two of the biggest figures in his nation's history. In a poem from 1977, he wrote: "Lo que Marti prometio, Fidel lo cumplio" ("What Marti promised, Fidel delivered"). Guillen's poem refers to Cuban independence hero Jose Marti, the inspirational figure in Castro's own political life. Marti promised a Cuba free of US interference and, famously, a republic that would be as he put it: "For all Cubans and the good of all Cubans."

Castro was a thoroughly Martiano, he firmly believed what the apostle of freedom said. He was a consumate politician a man with a phenomenal capacity  to read the situation both domestic and international, which allowed him to turn his beloved Cuba  into a leading player in some of the major international conflicts that stirred the second half of the twentieth century.

The country that Castro took over was little more than an American satrapy, the capital Havana was a playground for US tourist where the mafia ruled. Abruptly, this world vanished to be replaced by a socialist state. American assets were nationalized, the mobsters were stripped of their casinos and prostitution rackets, and Cuba`s giant neighbour turned from patron and provider into implacable foe.

Within months the Eisenhower administration was plotting to overthrow Castro and similar efforts would continue for decades. By a conservative count, the CIA mounted at least 600 separate assassination attempts against him, some almost  comic and involving such devices as exploding cigars, very one of them failed. By the end, Castro had outlasted  ten presidents, before he stepped down because of illness in 2008, having run the country for 49 years. He was a man who stayed true to his convictions throughout his time in power.

No other country in the region achieved anything similar to what Castro achieved . Cuba provided decisive support for the consolidation of the revolution in Angola defeating Portuguese colonialism in its last bastion : Cuba was with Vietnam from the outset and its cooperation proved to be of immense value to the people subjected to the American genocide. Cuba was decisive according to Nelson Mandela to redefine the socio-political map of the south of the African continent and put an end  to apartheid, countries like Brazil, Mexico, Argentina with larger economies, territories, populations have never been able to exert such gravitation in world affairs, but Cuba had Fidel Castro.

Castro stood out as an excellent man of government demonstrating efficiency and efectiveness in the management of the economy; which allowed this small country, not only to survive, but its indicators of social development are above some developed countries.

When comparing Cuban and American schoolchildren, in that country, in any poor zone of Mexican or Haitian immigrants or any other Latin American country of every 1000 children born, die 30, 35 and even more before the first year of life.  In Cuba there was a revolution that made justice, which established equality and dignity for all citizens without exception.

Cuba is a country where a school-age child is not seen wandering or begging in the streets, is the only country in the hemisphere including the United States where 100% of the children enter the seventh grade, a country where 99.5% Of the teenager graduates from ninth grade, it is the only country where children under 5 years receive the benefits of an education plan through the program Educate Your Child, Cuba is the only country in the hemisphere since the child is born has the possibility to grow healthy, to have a liter of milk daily, the necessary food and as for the education  he can go  from preschool to the university until he gets his Phd degree  without having to spend a single cent .: Cuba disposes of the best educational system among all countries, has the highest number of teachers per inhabitant and a lower number of students per classroom, there is no primary school with more than 30 students per teacher and classroom .all this despite the special period and the blockade, the longest economy blockade in the world history.

Cuba has been the only Latin American country that achieved the generalization of  social justice. The entire population of 11 million people enjoys the rights of free access to health and education, which deserved  praises from  the  Pope John Paul II on his trip to the island in 1998.

One of the most beautiful examples given as testimony to the nations of the planet is undoubtedly the creation of international medical brigades, an unprecedented event that undoubtedly deserves to be recognized as one of the great contributions to humanity.

Thousands of medical practitioners graduate in Cuba every year and Cuba sends them to more than 60 countries across the globe to provide aid and assistance.  Cuba has a world class biotech industry that is saving millions of lives through dispensing vaccines and drugs to needy countries at a fraction of the cost that large multinationals would charge.  This scientific advance, generosity and solidarity with the poor and disadvantaged is attributed to Castro's vision.

For Castro the unity of Latin America and even more that of the people and nations of the then Third World was essential , that is why He created the tricontinental in January 1966 to support and coordinate national liberation struggles in Africa, Asia, and  Latin america and the Caribbean, he knew like a few that unity was essential to contain and defeat the US imperialism that in its dispersion our people were the undefended victims of the despotism of the United States, and it was urgent and necessary to return to the initiatives proposed by Simon Bolivar in the 1863 Anfictionic Congress, he already anticipated in his celebrated letter of Jamaica of 1815. In line with these ideas was the great strategist of the process of growing supranational integration that began to germinate in our America since the end of the last century, when he  found in the figure of Hugo Chavez Frias the field marshal who  needed to materialize his ideas. Chavez was the one who picked up the torch of opposing and resisting US hegemony in the region.

The collaboration between these two giants of our America opened the door to an unprecedented process of changes and transformations that gave way to the most important economic and geopolitical project that the empire had developed for the hemisphere the Free Trade Agreement of the Americas.  Like Chavez, Castro was a very cultured man and an insatiable reader, his passion for the accurate and thorough information was inexhaustible. Castro was beyond his rhetoric a visionary in the strategic direction of the Cuban process, getting in its moment the unification of all the organizations, with the purpose of creating a movement capable of organically directing the revolution on the island.

Castro possessed an undeniable personal charisma and a degree of humanism that attracted support from both the oppressed masses of Cuba and wider layers of intellectuals and radicalized youths internationally. Only someone endowed with exceptional leadership, and with innate mentality of leadership could achieve such a feat. The Cuban process had not entered into a phase of internal confrontation, in which the only ones favored would be the historical enemies of the people, if it had not taken the strategic initiative to call for unity among political groups and movements.

Fidel Castro is a person who has influenced many people : I would say millions of people , I am one of those influenced by him  and I think his legacy will live on forever . He was a man true to his convictions. Whether one agrees or not with his politics, it has to be accepted that through all his long years in power, Castro stayed true to his convictions to the end. That in a politician is a very rare quality and I suspect will be his longest lasting legacy. A  legacy that  will echo long beyond his death..
Posted by nickglais on 2/25/2017 05:56:00 AM