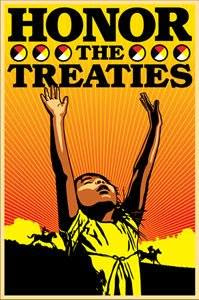 Hundreds of police in riot gear and carrying night sticks are clearing the final Dakota Access Pipeline protesters, who remained on federal land in violation of orders by the governor to vacate the area by 4:00pm local time. Protesters consider the land to be indigenous property, Standing Rock, under treaty.

Police regrouped following several arrests, returning to formation opposite protesters on the road. Remaining protesters anticipated them rushing at any moment.

Several minutes later, the police backtracked their position, leaving room open possibly for more back up or vehicles to arrive. With little sunlight left, and an announced clean-up scheduled for Thursday morning, it is unclear what their next move will be.

As police backed up, a small group of military veterans aligned with the protesters advanced their own line, keeping a distance of many yards.