Nepal : Biplav faction has deviated from the revolutionary spirit of MLM by Next Front 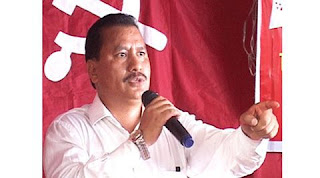 'The Next Front' also has got the copy of their document. And having gone through the document, there is no any hesitation to say that, Biplav faction has deviated from the revolutionary spirit of the Marxism-Leninism-Maoism. It will be better to give detail analysis of the document after its final draft. Now just we want to put some point below:

l. According to their document they have removed Maoism from their Party name. But they have not given the rational answer for removing Maoism.  Maoism is not just a terminology, it is the value and symbol of revolutionary enthusiasm-direction for the people's revolution. This decision has raised a lot of question and curiosity among the cadres also. In fact, it is the homework to remove Maoism from their guiding principle and practice.

2. In their document, they have mentioned China, Cuba and North Korea as the Socialist countries. This is not a new announcement, this is the recurrence of their earlier decision. There is another point to note that, in their 100 pages document, they have not mentioned even a single word about the Peoples War in India, Philippines and Turkey. They have forgotten the value of proletariat internationalism. Indeed, they have not forgotten, just they have neglected the significance of proletariat internationalism. Because, they have not to follow the path, followed by the Communist party of India (Maoist) and other countries, waging the People's war.

4. Knowingly or unknowingly, some Medias have mentioned that Biplav faction has taken the line of Peoples War. It is not true. In fact, from the very beginning, Bivlav faction has discarded the political line of the People's War. According to their document, in the current situation in Nepal, the ideological and political line guided by both Lenin and Mao is irrelevant. They have mentioned their political line as: 'unified revolution'. But they have not made clear, what the 'unified revolution' means. They have explained it as a 'new type' of urban insurrection.

They have not mentioned even a single word about 'three magic weapon,' as guided by Mao tse-tung. In fact, they have minimized the role of New Democratic Revolution. We must be clear, that Biplav faction never accepted the People's War as the ideological-political line for the Nepalese revolution.

5. Biplav faction also has denied the Maoist concept of two line struggle. In their opinion inner- struggle and two  line struggles are not the same thing. It must be separated. The inner struggle should not be labeled as class struggle. It is the differences in opinion among the leaders, it is not the two line struggle. What a matter of surprise!

We don't think that their National Congress will do any fundamental change in their document. Most of the cadres of Biplav faction are youths, who never took part in the class struggle and they have no any experience of People's War also. Just they have gone through in the book, about the Peoples War in Nepal.  This new generation has no any interest in the study of philosophical and ideological materials. They are motivated by the financial motivation Even the leader Biplav also has not any interest in study, debate and discussion. In fact, the new generation is known as the follower of 'face book revolution'.

It is true, Biplav faction has mentioned MLM as their guiding principal. But, it is also true that Maoist Party led by Prachanda also, has mentioned MLM as the guiding principal. Just mentioning MLM as the guiding principle will do nothing. It needs the application of MLM in practice, it needs dedication and devotion in the class struggle—the People's War. No doubt, it is crystal clear, that the document of their National Congress is a document of deviation and false direction. That's why, Biplav faction has gone far away from the revolutionary spirit of the Marxism-Leninism-Maoism.
Posted by nickglais on 2/13/2017 07:28:00 AM