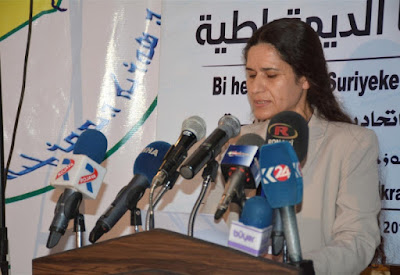 Speaking at the Syrian Democratic Council (MSD) congress, Co-chair Ilham Ehmed stated that the Democratic Federal system had proven to be the only solution during the course of the war ongoing in Syria for six years.

Remarking that the battle in Syria had turned into a nationalist and denominational war, Ehmed added:

"The period of six years with a crisis reveals the essentiality of a democratic and federal project. Several powers want to divide Syria and to change its demography. Most recently, the Turkish state launched a move to invade Northern Syria on the anniversary of the Battle of Marj D?biq. Through this invasion, they want to turn back to the Ottoman period. Iran and many other powers are working for an intervention on these lands.

The Federation project is based on the principles of respecting the identity of Syrian peoples and protecting the values of free citizen and justice. We see now the reality of the transformation of the Syrian Arab Republic into the Syrian Federal Republic. This system involves all the Syrian peoples, it is not based on one single nation alone. Syria, which is playing a leading role in the democratisation of the Middle East, needs a true democratic transformation."

Calling on the libertarian circles in Syria to take part in the building of the Federal system, Ehmed said: "The Democratic Nation project is not a dream. We are trying to build it at the moment. We must embrace the values of our country all together, and draw the map for the resolution of the Syrian crisis together."

Ehmed ended her speech by pointing out the urgent need for a ceasefire, an end to the siege on the country and formation of the foundations for the return of all the people that have been forced to migrate.