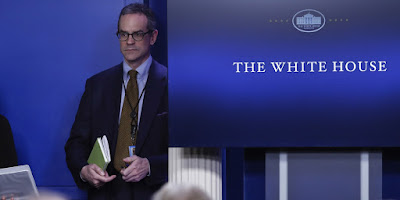 Democracy and Class Struggle says an excellent article in the Intercept examines the fascist source code of  Trumpism and it not just the  White House Strategists Steve Bannon's - Evolaism  but also Micheal Anton's Carl Schmittism senior director of communications at the National Security Council.

We strongly recommend you read the article linked below.

The Stench of Fascism from the White House is getting stronger.


Carl Schmitt was a highly regarded intellectual in Weimar Germany when he joined the Nazi Party in 1933 and became a prominent and enthusiastic supporter of the worst anti-Jewish laws that were soon enacted.

His is referred to as “Hitler’s Crown Jurist,” and after World War II he was held for more than a year at an allied internment camp for Nazis. .

Schmitt despised liberalism and, as Michael Lind explained in an incisive article two years ago, made a philosophical argument for a type of populism led by “a charismatic leader who saves the people from danger by acting decisively, outside of the law if necessary.”

This is sometimes referred to as “decisionism,” in which authority is derived from taking action, strong action, without necessarily having a plan or needing to show positive results or following the law.

The opening line of Schmitt’s 1922 book, “Political Theology,” gets at some of this: “Sovereign is he who decides on the exception.”

One of the most important tasks of leadership, according to Schmitt, is to identify and fight against a common enemy.

As he put it in one of his most-cited lines, “The high points of politics are simultaneously the moments in which the enemy is, in concrete reality, recognized as the enemy.”

Lind described Schmitt’s view of the political world in this way: “The exception is the rule. The emergency is the norm. The nation is constantly on the verge of collapse and threatened by enemies without and within.”

Quinta Jurecic, an associate editor of the blog Lawfare, noted in an essay a few weeks before Trump took the oath of office that he “has given us genuine reason for concern that he may actually represent the Schmittian nightmare feared by many on the left and in the civil libertarian community after 9/11.”