Ryabkov slammed as “unfounded speculation” a report by The Wall Street Journal about the US administration’s plans to damage Iran-Russia relations. 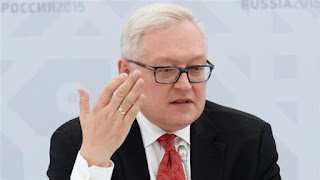 Democracy and Class Struggle says the US Strategy to create problems between Iran and Russia and China and Russia is becoming more transparent and unravelling before our eyes.


Russian Deputy Foreign Minister Sergey Ryabkov has expressed his regret over the new United States’ sanctions against the Islamic Republic, saying bans are not an appropriate means to resolve issues.

“We regret this happened. We have always expressed our stance that sanctions are not an acceptable and suitable tool for resolving certain issues,” TASS new agency quoted Ryabkov as saying on Monday.

The US Treasury Department said on February 3 that Washington had imposed sanctions on 13 individuals and 12 entities as part of bids to ratchet up pressure on Iran chiefly over Tehran’s missile program.

The move against Iran is the first by the US government since President Donald Trump took office on January 20.

In a statement on the same day, the Iranian Foreign Ministry slammed as illegal the US anti-Iran sanctions and said the Islamic Republic would deliver a "proportionate and reciprocal" response to the move.

“The Islamic Republic of Iran, with the backing of the wise participation and support of the great Iranian nation, will respond proportionately and reciprocally to any move that targets the interests of the Iranian people,” the statement said.

Russia believes that Iran’s missile test launches do not create any problem in the implementation of the JCPOA, Ryabkov added.

He emphasized that the international community is “now focused on the pace of” the JCPOA implementation, saying Moscow also celebrated the first anniversary of the nuclear agreement’s enactment in January.

“We do not see any special problems in this area. We want to stress again that missile launches with the use of missile technologies are not a breach of the [Joint Comprehensive] Plan of Action and UN Security Council Resolution 2231. We have brought this position to the notice of the US side as well," the Russian deputy foreign minister said.

Moscow expects that “strict and clear-cut reading” of the JCPOA provisions and Resolution 2231 would be “the main thing in the determination of Washington’s further policy in this direction," Ryabkov added.

The United States claims that a recent missile test by Iran violated Resolution 2231 that endorsed the JCPOA.

"Iran's missile tests are not, and have never been, in violation of the JCPOA or Resolution 2231,” Dehqan added.

Ryabkov also slammed as “unfounded speculation” a report by The Wall Street Journal about the US administration’s plans to damage Iran-Russia relations.

“The Wall Street Journal and many others do nothing but look for reasons for unfounded speculation and groundless insinuations and attempts to poison the atmosphere of relations," the senior Russian diplomat said.

In a report published on February 5, The Wall Street Journal quoted senior US administration, European and Arab officials as saying that the “Trump administration is exploring ways to break Russia’s military and diplomatic alliance with Iran.”

“If there’s a wedge to be driven between Russia and Iran, we’re willing to explore that,” an official told the US daily.

Syria has been fighting foreign-sponsored militancy over the past almost six years. The UN Syria man, De Mistura estimated in August last year that more than 400,000 people had been killed in the Syrian crisis until then. The UN has stopped its official casualty count in Syria, citing its inability to verify the figures it receives from various sources.

Iran has been offering Syria advisory military assistance, and Russia has been carrying out an aerial campaign against the militants in the country on a request from the Damascus government.