US, South Korea liable for consequences of THAAD deployment: China 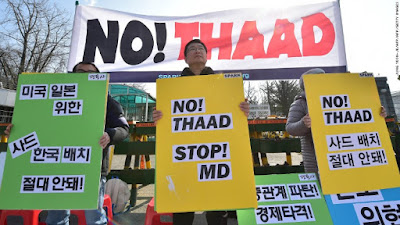 Democracy and Class Struggle says President Trump has already declared his intention of a new nuclear arms race with Russia but the deployment of the THAAD System in South Korea whose radar see into China and Russian Far East will rapidly destabilize Northern Asia and invite Chinese and Russian counter measures.


China says the United States and South Korea are totally responsible for “any consequences” of their decision to deploy the US Terminal High Altitude Area Defense (THAAD) missile system on the Korean Peninsula, warning that Beijing will “resolutely” adopt due measures to protect its own “security interests.”

The installation of the US advanced anti-missile system by the Republic of Korea Armed Forces (ROK) “will severely disrupt regional strategic balance, gravely jeopardize the strategic security interests of relevant countries in this region including China, and is not conducive to peace and stability on the Korean Peninsula,” said Chinese Foreign Ministry spokesman Geng Shuang in a Monday press briefing.

Beijing’s warning came a few hours after the board of South Korea’s Lotte Group, a giant multinational conglomerate, announced that it had approved a land swap with the Seoul that would enable military authorities to deploy the THAAD missile system on an area that is part of a golf course owned by the Lotte International Co Ltd.

In return, the ROK reportedly gave the Lotte Group a state-owned military site in the vicinity of the capital.

Seoul and Washington reached an agreement over the THAAD’s deployment in July last year and planned to take over the golf course in January, but the move was delayed due to strong objections by China. South Korea and the US claim that the purpose of the deployment is to counter perceived missile threats from North Korea.

North Korea and China, meanwhile, believe the THAAD deployment is meant to expand US hegemony. They also believe that the deployment of the US missile system on the Korean Peninsula would destabilize the region’s security by upsetting the military status quo.

“One country's security cannot be pursued at the expense of other country's security. Regrettably, ignoring China's interests and concerns, the ROK insisted on working with the US to accelerate the deployment process. China is firmly opposed to and strongly dissatisfied with that,” Geng further said.

He added that Beijing strongly urged relevant parties to stop the deployment process and not to go further down “that wrong path.” Chinese officials have long complained that the US system would interfere with their radars and could pose a threat to Chinese security.

However, it is expected that the land swap deal pave the way for the THAAD installation between May and July. The advanced missile system has been designed to intercept ballistic missiles inside or just outside the atmosphere during their final phase of flight.