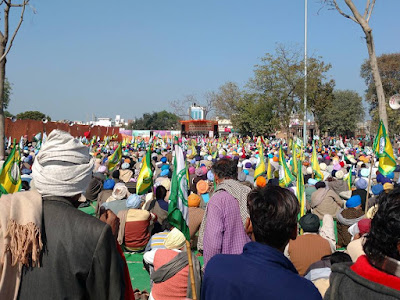 SALUTE THE HISTORIC ELECTION CONFERENCE ON 31ST JANUARY OF RAJ BADLO SAMAJ BADLO FRONT IN PUNJAB..EVENT WILL WIN A PERMANENT PLACE IN THE ANNALS OF REVOLUTIONARY MOVEMENT OF PUNJAB.

On January 31st,2017 I was privileged to witness the Raj-Badlo Samaj-badlo conference in Puda colony stadium in Civil line area of bathinda town of Punjab .Around 11000 people were mobilized in a conference to expose how undemocratically the parliamentary democratic system worked in Punjab and what tasks they should undertake to win their rights.#

Peasants,landless labourers,industrial workers and youth illuminated the venue with the torch of resistance like a candle light turning into a bonfire.

The Ruling class parties be it the Akali Dal,Congress or Aam Aadmi party played a game to capture the votes of the people and though different in form in essence were all the same.

Here the politics of active political campaign was propagated and not of 'boycott' or participation in elections through putting up candidates.The participation of constituents from 3 major sections in the Communist Revolutionary camp was heartening.

The representatives belonged to the BKU-Dakaunda,krantikari and Ugrahan sections as well as the Inquilabi Kendra,Naujwan Bharat Sabha and Punjab Khet Mazdoor Union.Thew C.P.I.(M.L.) New Democracy abstained from participating as they put up candidates while Lok Sangram Manch supported 'active boycott.'

A section split from the Maoist ranks within the BKU Krantikari to join the lok Kaffla group led by Darshan Pal.

Thus 3 trends of groups namely the C.P.R.C.I.(M.L.),the C.P.I(Maoist) and the Communist League of India united.

It spoke volumes of the painstaking work done by revolutionary mass organizations who explained the people how the nefarious ruling class parties had no programme to solve their burning issues.

Thousands of posters were put up and leaflets distributed explaining the purpose of the conference.In Ludhiana a separate leaflet was printed for industrial workers.The planning of how the event was to be organized played a major role in it's success.

The work of the revolutionary organizations was in total contrast to that of the Akali Dal, Aam Aadmi and Congress parties who literally fought a see saw battle vying for votes.

Although in power for over a decade the ruling Sikh-fundamentalist Akal Dal has been a total stooge of the big landlords and corporates and in it's era the unemployment,peasant suicides,drugs have phenomenally increased. etc

In spite of their great attempts to project Sikh communal politics they often had to bare the wrath of the masses.

In Fategarh Sahib district a once thriving steel mills and furnaces in Mandi Gobindhgarh, was closed which caused the losses of thousands of jobs.It had been one of the country's largest steel markets and production centres.The govt.had given an excuse of a global showdown in the steel sector.Kamajit Singh,63,a former policeman turned farmer stated ,"What difference can a new international airport make in a poor man's life when the lot of the poor and midle class has deteriorated in the last 10 years.69% of voters hold the politicians are responsible for the drug problem in the state.

Leaders like Amarinder Singh of Congress and of the Aam Admi party have tried to capitalize on the weaknesses of the ruling Akali Dal party on issues of jobs for punjab's youth.AAP adopted strategy of introducing smartcards and smartphones while Congress introduced the 'Har Ghar Captain' to connect with youth some moths ago influencing over 6 milion voters.Quotingh 22 year old Pawandep Singh who runs a minor auto accessories kiosk after he failed to find a job stated,"Unemplyment is the biggest problem with dig abuse and demonetization.52% of the 19.7 million registered voters were young people

.'Whatever their promises in essence the Congress and AAP comprise parts of the same metal as the ruling Akali Dal and equaly subservient to the dictates of the big landlords and corporates.None have an agenda for implementing genuine land reforms,creating jobs through building aground-intensive industries,awarding dalits 1/3 land rights in panchayat and plots.compensating families of farmers commiting suicide,proper roads or electricity etc. Ruling parties never kept their promises for over 70 years.None of those parties have any genuine agenda to replace the semi-feudal,semi colonial order. 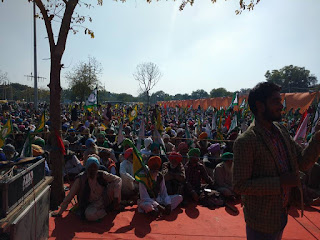 Very significant that so many activists were present in the Bathinda rally and the atmosphere was reminiscent of many streams flowing to form an ocean.Speakers represented the youth,workers ,landed and landed peasantry.6 speakers adressed the conference. Pavel Kussa, Jhanda Singh Jethuke,Buta Singh Burgil,Shider singh Nathuwal,Lal Singh Bulewal adressed the conference..

Jagmohan Singh and Laxman Singh Sewewala chaired the meeting.They explained how the ruling class parties be it the Akali Dal.Congress or AAP worked tooth and nail to break the unity of their struggles on any issue be it land reforms,unemployment,price rise,plots to agricultural labourers,electricity,compensation for suicides etc.6 speakers adressed the rally.All propagated that the ruling parties never kept their promises for over 70 years.

They gave examples of how the govt.used the shagun scheme to win votes or on dal and dough or old age pension schemes They also elaborated how people must have to convert their struggle on day to day issues into political demands which was the only way a genuine movement could be built.The concept of technology developmental model creating self-reliance and not dependence on imperialist country was contrasted with the current model in Punjab which increases dependence.The loot of the corporates and the impact of multinationals was exposed,particularly on the agricultural sector..

Jhanda Singh Jethuke of BKU-Ekta (Ugrahan)gave examples of some of the instances where peoples struggles triumphed like in Gobindpura,Faridkot,Mehelkela,Channa Pind and stated that the peasantry displayed it's enormous potential in fighting for genuine revolutionary democracy He also gave an example of a victory of a suicide compensation in Bathinda.In Mansa 152 acres of land was awarded to the peasantry.

He related how totally in Punjab 94 crores compensation at 2 lakhs per head was won by the peasant families whose members commited suicide and how 140 acres of land was won which had been seized by the corporates and politicians.He called on all sections of people to consolidate the unity prevalent amongst all democratic section sof the people..Kanwaljeet Khana covered the issue of the repression and discrimination or marginalisation of the dalit labourers and community as whole.

He gave an example of how the AAP tried to hoodwink the people by propagating that they would appoint a dalit as the deputy chief minister if they came to power.Pavel Kussa of Naujwan Bharat Sabhaspoke about how the state neglected building proper hospitals or schools and implemented a model of development totally favouring the rich and corporates.

He elaborated on how the ruling party promised all basic facilities for the youth ,be it solving unemployment,creating better educational facilities etc within the very development model prevalent today.He covered how this model of development enslaved every section of the toiling masses and how within this very system no basic demands of the youth could be fulfilled.

He expressed the need for agro- intensive industries to be created which mutually served agriculture and how through mutual c-operation pro-people industrial and agricultural facilities would be created.Buta Singh Burgill of BKU (Dakaunda)made the point that from 53 % of national income earlier derived from agriculture the figure is now reduced to 13%.Shinder Natthurwala of BKU(Krantikari) even covered the question of right of nationality and secession in Kashmir and Assam and how the state was supressing those movements.

The conference ended with a most artistically done and significant cultural programme done by the Punjab Loksabhyachark manch which used the peoples idioms to describe the nefarious policies of ruling class parties.In Ludhiana a seperate programme based on the same theme was carried out by the Moulder and Steel workers union in Ludhiana which is major industrial belt.I was deeply stirred by the wath and enthusiasm expressed on the faces of the people after each speaker had delivered his talk.,reminding one of a simmering boiling pot.

I spoke to Lok Morcha Adviser N.K.Jeet who felt the rally was a most commendable achievement in light of the current situation when the ruling class parties were sharpening the tentacles of opression.A representative of the Inquilabi Kedra,Narain Dutt shared this view and added that it defied the attempts of ruling class parties like Akali Dal who literally tried to pull people to their rallies.Infact on the same day the Congress could not mobilize more than a quarter of the number of people present in the raj badlo samaj badlo event.

Above all he felt it was great experience and lesson for the revolutionary activists of not only to work at grassroot level but successfully unite inspite of having ideological differences.

Such an event is a lesson for the broad masses of the entire nation to not only organize on the basis of day to day class struggles but connect them to broader political demands.By merely calling for 'Boycott' when genuine peoples consciousness has not been instilled or alternative organ's of people's power built, ,a revolutionary campaign would be ineffective

Similarly participating in the parliamentary process without the sufficient development of the proletarian party or required liaison would lead to capitulation.

Such an event is a genuine thorn in the flesh for the pro-landlord,pro-corporate ruling class parties and played a great role in instilling revolutionary political consciousness.In no part of India do we see such an open political event during state elections which portray revolutionary democracy with such depth.It will sow the seeds for sharpening the genuine class movements and further the unity of landed and landless peasantry.

.Above all it will lay the ground for combating the fascistic economic policies of the rulers.A marginal weakness was that there was not strong participation of students,youth,women and industrial workers.

I thank the corporation particularly of comrades like Narain Dutt who explained it's significance in great detail as well as Pavel Kussa.Farmer leaders blame govt for failure to improve conditions
Tribune News Service Bathinda, January 31

Farmer leader Jhanda Singh Jethuke said, “Only being honest is not enough. Farmers should think from which party they want to get the sticks. We have to fight for the rights on our own. There is a need for complete change in government policies, including the working of the police and bureaucracy. Heavy taxes should be imposed on big corporate houses and big rural and urban proprietors. Employment in the field of agriculture should be promoted.”

“One the one hand, governments have been making people befool from the past 70 years while on the other, unemployment, inflation and poverty have overpowered the common man,” he added.
"I had seven acres of land, of which three acres were sold following the debt and due to the loss of cotton crop in whitefly attack. My name was not included in the list of farmers whose crop was damaged," said farmer Bawa Ram, who came to attend the rally.

Like Bawa Ram, there are many other farmers some of whom did not get any compensation despite their name being on the list.
Posted by nickglais on 2/07/2017 12:09:00 PM