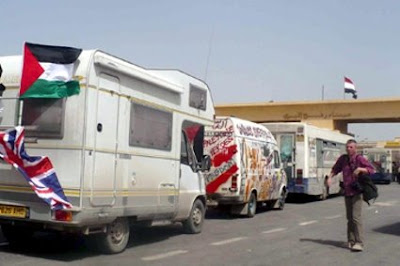 And they entered side by side like heroes, some on foot some in their vehicles, tears, smiles, hugs, flowers. It was historic, it was legendary. Gaza we are here. We have fulfilled the promise - Viva Palestina! The lifeline from the people of Britain to you, the people of Gaza, has arrived.

We have broken the barriers, we have opened closed borders, we have defied the odds,we have overcome the challenges across thousands of miles and three continents. We are here to be with you, to embrace you, to share your tragedy with you.

After another morning of intense negotiations, a deal was reached to allow all of the members of the convoy to go through. In the end, Viva Palestina had to make the sacrifice of agreeing that some vehicles will have to cross the border from the Al Ouja Israeli controlled crossing point. This includes our mascot, the fire engine and the boat. This was due to the restrictions imposed by Egyptian law governing the Rafah Crossing.

A tearful Talat Ali told me that 'Rafah is the most beautiful crossing in the world', he also said that the time , effort and sacrifices put in by all the Viva Palestina family meant that history has been made today - on the day the prophet Mohammed (PBUH) was born.
Posted by nickglais on 3/09/2009 01:46:00 PM