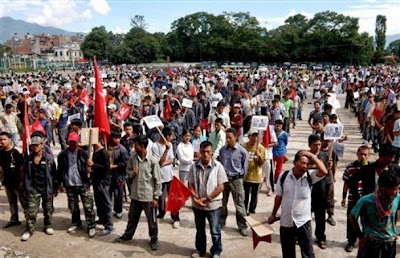 KATHMANDU, March 19 (Xinhua) -- About half a dozen students were wounded in a serial bomb blasts in south Nepal on Thursday morning.

The blasts occurred on Thursday morning in front of the Thakurram Campus in Birgunj, some 90 km south of Nepali capital Kathmandu, according to local news website Myrepublica.

The students were in a queue to cast their votes for the Free Students' Union (FSU) election.

No organization or individual has claimed the responsibility for the blasts.

FSU elections are taking place on Thursday in various colleges affiliated to Tribuhuvan University (TU), the largest and most important university in Nepal, and Sanskrit University (SU) across the country.

Elections have been postponed in various colleges due to controversy on voters' list and the row over proportional representation in the FSU.

Student wing of the opposition party Nepali Congress, Nepal Students' Union (NSU) has called for a strike in some places of the country.

Security has been beefed up around the colleges throughout the country in order to prevent violence during the elections. Some 1,300 security personnel have been deployed in Kathmandu to maintainsecurity in Kathmandu colleges
Posted by nickglais on 3/19/2009 04:04:00 AM