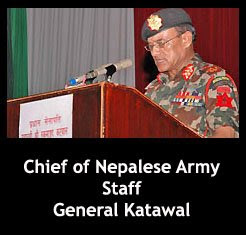 He first called on President Yadav at the latter's office, Shital Niwas, to discuss the Defence Ministry's decision and its ramifications. Katawal is known to have expressed serious reservation over the ministry's decision saying it could create administrative complications in the army, especially in the promotion procedures of senior officials.

In a letter to the Defence Ministry on February 1, General Katawal had requested the ministry to extend their tenure by three years.

Meanwhile, during his meetings with Prime Prachanda and Defence Minister Thapa in the afternoon, the army chief is known to have complained about the ministry's decision and urged them to reconsider it.

Brigadier Generals get retired after completing four years in the post, but the Army Act allows them to continue until 57 years of age provided the Defence Ministry extends their tenure. Most of the retiring Generals are said to be under 54 years
Posted by nickglais on 3/18/2009 03:41:00 AM