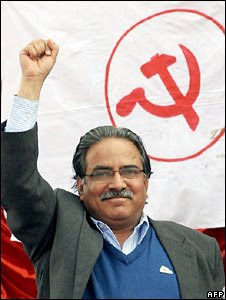 The government and the representatives of agitating Tharu community have signed a six-point pact bringing an end to the two-week long agitation that had crippled life in various Terai districts Saturday night.

Talks between the agitating Tharu community and the government finally succeeded after Prime Minister Prachanda himself participated in the talks on Saturday.

The talks succeeded after Tharu leaders agreed on the government’s proposal to replace the term ‘Madhesh’ by ‘Terai-Madhesh’ in the interim constitution and other statutes including the controversial ordinance on reservations.

The government will initiate process of constitution amendment to make the changes, according to the agreement. The ordinance on reservation will also be amended to guarantee a proportional representation of all ethnic communities in public bodies.

The agreement was reached at the talks held between the government team headed by PM Prachanda and representatives of the agitating Tharu community in presence of various other leaders at PM’s residence in Baluwatar, late Saturday night.

Earlier, a meeting of the seven major political parties had authorised the PM to go ahead with the talks with a proposal to amend the constitution to address the demands of the agitating Tharu community along with other ethnic groups.

Tharu organisations and other ethnic communities supporting the agitation have called off all programmes of agitation with the agreement. A general strike called by the Muslim community has also been called off.

According to the agreement, the government will declare four cadres killed during the agitation as martyrs, bear the cost of treatment of those injured and release all cadres arrested in connection with the agitation.

Democracy and Class Struggle Welcomes this agreement between the Tharu community and the Government congratulations to Prachanda and the Tharu leadership
Posted by nickglais on 3/15/2009 10:03:00 AM