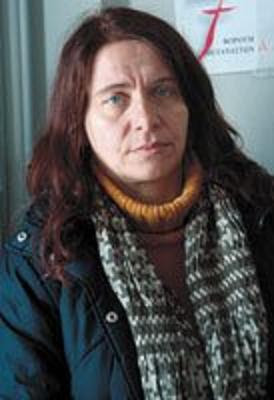 Konstantina Kuneva is a female, single mother, migrant worker and grassroots syndicalist who was attacked with sulfuric acid by employer-hired thugs in late December 2008. She has suffered major injuries and is being treated in intensive care in Athens since. The attack happened in the aftermath of the December revolt, and the solidarity response of the movement was vigorous and dynamic throughout the country. Fund raising events are still taking place in various greek cities because of the urgent need for money, that will allow Konstantina to travel to the USA for an elaborate and very expensive operation, which her only chance to have some of her basic bodily functions restored.

The Communist Organization of Greece is active part of this movement of solidarity, which moves under the slogan “Konstantina you are not alone”. We address an appeal to all the progressive forces to express their solidarity with Konstantina Kouneva, with the All-Attica Union of Janitors, with all those most exploited and “anonymous” militant workers who save the honor of the trade-union movement and continue its best militant traditions, bravely facing the attacks of the bosses and the hostility of the state and of the “official” trade-union leaderships.

The Union of the Working People, which is active in the movement of solidarity with Konstantina, would welcome your support and the support of trade-unions from your country.

Also, consider the possibility to address the trade-unions and other workers’ organizations in your country and ask them to contribute financially in the fund-raising organized by the Union of the Working People for Konstantina.

The details of the bank account opened by the Union of Working People for Konstantina are the following:

In case you participate in the fund-raising, please inform the Union of the Working People and/or KOE.

We thank you in advance for any action you may undertake in order to express your solidarity and to condemn the murderous crime against the militant worker and unionist Konstantina Kouneva, who is always fighting for her life and for the rights of the most oppressed and exploited workers
Posted by nickglais on 3/10/2009 12:49:00 PM