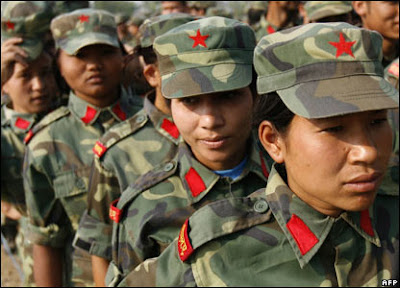 Minister for Peace and Reconstruction Janardan Sharma on Sunday said that "political discussion" has already started on the main issue of federalism, state restructuring and army integration.

The Maoist minister also said that there has already been an understanding at the "policy level" to integrate Maoist combatants into the Nepal Army and that now it only remains to be done in action.

Speaking at a press meet organised in Baglung district by Maoist aligned Revolutionary Journalists Association, he claimed that although army integration appears to be controversial it is actually not so and that the process will move ahead smoothly.

"Army integration is not controversial as it has been mentioned in the Interim Constitution and Comprehensive Peace Accord," he said, adding that the Army Integration Special Committee will decide on the ways to go about it.

Minister Sharma further said that apart from rebuilding the physical infrastructures that were destroyed during the conflict, the "conservative mindset" that exists in the country needs to be also changed.

He also informed that the government is holding dialogue with the Madhesi underground outfits by becoming very sensitive to the latter's concerns and demands.

Meanwhile, the hearing on the recruitment of 2,884 combatants and non-combatants by Nepal Army against the government's directive has begun in the Supreme Court Sunday.

Responding to a writ petition filed by INHURED International, the SC had on Feb 22 issued an interim order in the name of the government and NA asking the latter to stop the recruitment process.

Apart from government lawyers, NA has also hired private lawyers to defend its case in the Supreme Court.

On Saturday, the ruling coalition had discussed the issue of army integration at a meeting in Baluwatar.

At the meeting the coalition partners reached a conclusion that the NA made a mistake by going ahead with its recruitment plan.
Posted by nickglais on 3/01/2009 08:19:00 AM