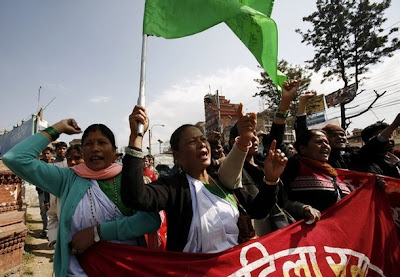 The first round of talks between the government and the agitating Tharus and other janajati groups ended inconclusively Tuesday evening.

The talks held at a resort in Babalmahal, Kathmandu, were adjourned as the government team headed by Peace and Reconstruction Minister Janardan Sharma said it could not decide on the demands of the agitating groups without discussing them with the Prime Minister.

"Minister Sharma told us that he would clarify the government's position on our demands tomorrow," Laxman Tharu, who led a nine-member team of Tharu Joint Struggle Committee, told reporters.

He said the agitations would continue unless the demands, which include scrapping of the ordinance that put Tharus in the Madhesi category, were met.

"If there is no appropriate response from the government side by tomorrow protests will spread across the country," Tharu warned.

Tharus and other Terai-based janajati groups have been waging a protest movement in Terai for the last ten days, closing highways, educational institutions and businesses.
Posted by nickglais on 3/10/2009 09:41:00 AM