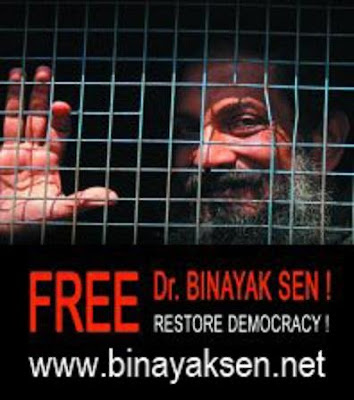 Binayak Sen, doctor and civil rights activist, has been in prison since 14 May 2007, when he was arrested under the Chhattisgarh Special Public Security Act (which allows arrest up to 90 days without charge) on suspicion of 'involvement' with Maoist insurgents. The mineral-rich central Indian state of Chhattisgarh has seen massive forced displacement of adivasi (tribal) people to make way for the exploitation of resources by private companies in recent years. In this context, a civil war-like situation has emerged in the state, marked by brutal conflict between the state and the Maoists, who control significant stretches of territory. Binayak and Ilina Sen have been campaigning for human rights in Chhattisgarh for many years, and have been outspoken opponents of the Salwa Judum, a state-sponsored paramilitary terror initiative, which has involved arming local people 'against Maoists' and thus unleashing even deeper strife in the state. Soon after helping expose police involvement in the killing of 12 tribal people on 31 March 2007, Binayak Sen was targeted and imprisoned. His applications for bail have repeatedly been rejected by Indian courts.

Sen is nationally and globally known for his work in community health. In 1983, he was instrumental in setting up the community-based Shaheed Hospital for mine-workers, and, later, was a member of the state advisory committee initating community-based health programmes across the state. Recently, while in jail, he was awarded the Jonathan Mann Award by the Global Health Council for his work with impoverished communities and his commitment to human rights.

Sen's advocacy and activism, in the fields of both health and civil rights, have been a persistent thorn in the side of the Chhattisgarh government and, at a deeper level, the Indian state and its neo-liberal agenda. The embarrassingly flimsy 'evidence' on which he was arrested was his visits to a Maoist leader in jail, visits he had undertaken as state general secretary of the People's Union for Civil Liberties, to provide medical and legal assistance, with the full knowledge and permission of the jail authorities. It is impossible to see his arrest, and the continued refusal of bail, as anything other than a very deliberate attempt by the state to thwart dissidence expressed in any form, and to avert uncomfortable questions about its role and agenda.