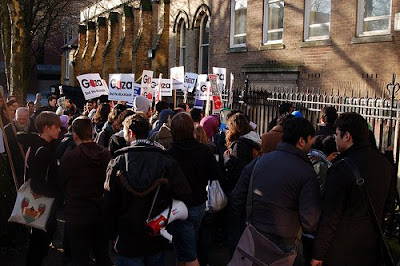 Negotiations with Vice Chancellor Alan Gilbert started on Monday. There were three occupiers sitting alongside the Student Union Executive (which has many pro Israeli members). There will be further negotiations on Friday.

The University is arranging for surplus academic supplies to be sent to the Islamic University of Gaza. Alan Gilbert was very keen on this demand, and has been in discussions with the librarians to ensure that all disused books and other supplies are made available. As the occupation lasted a lot longer than expected (evidently longer than it takes to drive to Gaza!), the Viva Palestina convoy mentioned in the original demand has now arrived in Gaza, so we are in the process of researching other ways we can transport these supplies.

Major progress has been made in securing divestment from the arms trade. Gilbert has agreed to improve transparency over the University’s investment portfolio. This may not seem like a lot, but students have been campaigning over the University’s millions of pounds of investments in the arms trade for over three years now and, despite numerous stunts and protests over the issue, progress has been frustratingly slow. In a matter of weeks, Manchester students will know exactly where the University is involved with the arms trade, and so, in future, will be able to make far more specific, and therefore realistic, demands for divestment.

Although the Vice Chancellor refused to boycott a country, he was willing to consider boycotting key companies linked to Israel. Soon the University should make available to us lists of the companies that it holds investments in, and purchases supplies from. From these we plan to make specific, realistic suggestions of companies linked to Israel that the University can boycott, and Gilbert has indicated that he would be willing to do this.

The University will not official fundraise for the DEC appeal, although Gilbert has invited us to do so ourselves on campus, including by entering lectures.
Posted by nickglais on 3/13/2009 01:31:00 AM