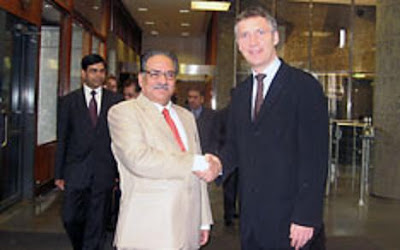 Prime Minister Prachanda, who arrived in Norway on Sunday for a week-long Nordic trip, on Monday said that Nepal’s peace process would come to a logical conclusion in four to five months.

Talking to Nepali and foreign journalists at the press conference,Prachanda said, “Since there are no differences on major issues among major political parties, we will be able to conclude the process in four to five months.” He said the coalition government was working to facilitate the integration and rehabilitation (of Maoist combatants) so as to take the peace process to a logical conclusion.

“The basis of integration and rehabilitation has already been laid,” he added.

Saying that Nepal’s “home-grown and unique” peace process could be a model to solve conflicts in South Asia, Prachanda also thanked Norway for its support throughout the process. He added, “We still need support of international community to move forward as we have many challenges ahead.”

He also told the media that the Constituent Assembly is most inclusive representative body Nepal ever had -- with substantial representation from ethnic and marginalised groups along with 33 percent women.

Saying that sustainable peace is not possible without economic prosperity, PM Prachanda called for more support from international community including Norway. “Drafting of the new constitution according peoples’ aspiration should go along with economic development,” he said.

He also mentioned that the government and the parties were committed to fundamental principles of democracy. “All the major parties including Maoists are committed to multiparty democracy, rule of law and human rights.”

Terming his Norway visit as "continuation of decades-old friendship", the PM said the visit would focus on enhancing hydropower development, bilateral cooperation in various sectors and other issues of mutual interest.

Speaking at the press conference Minister of the Environment and International Development Erik Solheim, descried Nepal’s peace process as “one of the most successful peace processes” and reiterated support of Norway to Nepal’s peace process, preparations for the new Constitution, economic development, education, energy and hydroelectricity, among others. Minister Solheim is hosting the Nepal PM’s visit.

PM Prachanda met his Norwegian counterpart, Jens Stolltenberg today. The meeting dwelled mainly on issues relating to Nepal's peace process, Norwegian support for peace and development, it is learnt. He will also have an audience with the King Harald V of Norway.

The Maoist-led coalition government has already unveiled an ambitious plan to generate 10,000 MW of electricity within the next 10 years so as to boost social, economic and development progress.

Norway is one of the major foreign donor for Nepal and has been assisting in the peace process here. Norwegian development assistance to Nepal has increased significantly in recent years and amounted to about NOK 260 million in 2008. Priority areas of Norwegian assistance include education, energy and good governance, reports say. PM Stoltenberg and minister Solheim had visited Nepal in 2008.

Meanwhile, PM Prachanda , who embarked on the Nordic trip on Saturday with a 19-member delegation, will also Finland on Wednesday.

In Finland, he is schedule to meet his counterpart Matii Vanhanene, Presdent Tarja Halonen and other political leaders. He will fly back to Kathmandu on April 4. nepalnews.com Mar 30 09

Democracy and Class Struggle welcomes Prachanda in Europe and wishes him success in his negotiations on education and energy and good governance in Norway.

Let him also be reminded that Norway has some of the best Maoists in Europe in Serve the People.