US and its OAS`s pawn attack Venezuela by Jesus Rojas 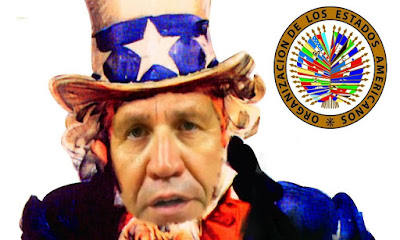 The United States mobilized its pawn, Luis Almagro, the Secretary General of the OAS, to attack the Bolivarian Republic of Venezuela.

Before the “soft coup” in Brazil, this disgusting character was ordered to keep his mouth shut.

Luis Almagro called for the implementation of the Democratic Charter against Venezuela.

Nicolas Maduro accused the secretary of the OAS of working in the service of the CIA.

He added that with that decision, Almagro was looking for ways to open the doors to a US intervention in Venezuela".

The former Uruguayan foreign minister made a presentation in which he said that "the institutional crisis in Venezuela demands immediate changes in the actions of the executive branch at the risk of falling immediately into a situation of illegitimacy”.

Almagro submitted a 132-page report referring to Article 20 of the Charter to "request the convening of a Permanent Council of the Member States between June 10 and 20, 2016, ", in which he planned to address “the alteration of constitutional order and how it seriously impairs the democratic order of the country.”

Recently, it produced a hard exchange of words between the Secretary General of the OAS and the president of Venezuela, Nicolas Maduro. In a public letter, Almagro accused Maduro of "denying the consultation to the people" in reference to the recall referendum and he said to the Venezuelan president: "that makes of you another dictator, like many who have had the continent."

Venezuela considers that the secretary general of the international organization is making fraudulent use of Article 20 to apply the Democratic Charter because the same applies for those Member States of the OAS when it has altered their constitutional order, ie, that impairs the democratic order to protect systems of coup d`etats.

The right-wing in Venezuela, within the National Assembly, has been promoting, creating and staging episodes of destabilization and coups. It is clear; it has taken pains to accelerate shortage of basic goods, social violence and psychological warfare throughout the country. This produces the conditions that Almagro needed to compose his alleged complaint using the Democratic Charter as a justification for calling an intervention against Venezuela”.

It is evident how it has built the stage, and gone about creating the requisite scenery and choreography in Venezuela so that with the help of media inside and outside the country, Venezuela is converted into a chaos, there is a humanitarian crisis, there is repression, and with that argument justify invoking the Democratic Charter.

In Mexico there are thousands missing and dead people due to the control that the drug trafficking has on much of the state apparatus. In Central America there are dozens of dead journalists and political assassinations, in Brazil there was a parliamentary coup, however, the secretary of the OAS did not think of asking for the application of the Democratic Charter for any of those cases.
People's governments of Argentina and Brazil have already been beaten. The Empire moved another piece on the board. Before Obama leaves the White House, he wants to give the final blow to Venezuela and say, "Checkmate".

After the permanent session in the OAS, the 34 member countries of the organization expressed their support for the process of dialogue between the government and the opposition.

Venezuela thus achieved an important victory in the OAS to convene the Permanent Council statement in support of the dialogue, the Constitution and peace and it also thanked the countries of the region for their support for the rule of law in Venezuela, "full sovereignty and constitutional democracy”.