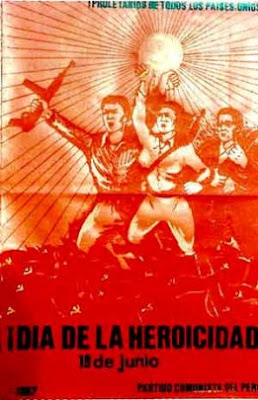 1987 statement from the Communist Party of Peru commemorating the massacre of 300 political prisoners on June 19, 1986:

The inexhaustible bosom of the people nourished them with frugal food and made them walk; class struggle shaped their minds; and the Party, as the primary and highest social form, raised their political conscience, arming it with Marxism-Leninism-Maoism, Guiding Thought, empowered their combativeness by organizing them in the People’s Guerrilla Army and, smelting them with the masses of the poor peasantry, steeled their bodies and souls in the inextinguishable forge of the People’s War.

Having become prisoners of war, they never knelt down and, persisted in fighting, mobilizing and producing amid fiery struggles.

They converted the sordid dungeons of the decrepit and rotten Peruvian State into shining trenches of combat. The smashing, well-aimed and implacable blows dealt by the People’s War and its unstoppable advance stirred the reactionaries’ hyena entrails, reverberating everything like continual lashings and peremptory demands in the turgid and disturbed nightmares of the Apra government, which is today already fascist and corporative, even more so in the unbridled ambitions of the apprentice demagogue “führer” who leads them; thus, the reactionaries, the administration and the now genocidal García Pérez dreamt bloodthirsty and dark plans for a devastating and decisive blow that would lead to the crushing of the People’s War. 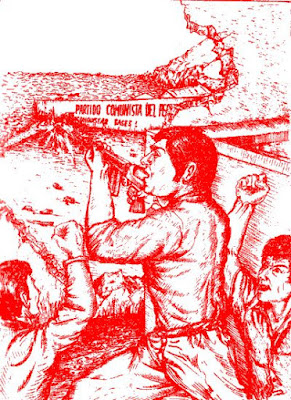 The prisoners of war’s rebellion is the public unmasking and condemnation before the world of these sinister plans for massive killing, in defense of the revolution and their own lives.

The monstrous and infamous genocide carried out by the armed forces and repressive apparatuses through governmental orders and given carte blanche, full of blind hatred against the people and perverse homicidal fury, was shattered by the ferocious, unbending iron resistance of the comrades, combatants and children of the masses who raised ideology, courage and heroism daringly displayed in an ardent, warlike challenge.

But if the reactionary beast drank blood until satiated in order to impose the peace of the cemeteries, those lives, wretchedly and cunningly cut short, were transformed into imperishable ones, forming the monumental trilogy of shining trenches of combat in El Frontón, Lurigancho and Callao, historical landmarks that will proclaim more and more the greatness of the Day of Heroism.

The would-be devastating and decisive blow wound up falling on the heads of those who engendered it and sank the fascist and corporativist Apra government and the one who acts as president, in violation of his State’s legal norms, resulting in a serious political crisis and the enormous loss of prestige from which they cannot yet extricate themselves.

The rebellion of the prisoners of war at the cost of their own lives won for the Party and the revolution a grand moral, political, and military triumph.

Even more, they notably served the success of completing the great leap with a golden seal and of laying the groundwork for the new plan of developing base areas, whose first campaign has been the greatest setback for the Peruvian State to date and which has had the widest repercussion of the People’s War both inside and outside the country.

In this way, the prisoners of war, like the great masses of history, go on winning battles beyond the grave, because they live and fight within us, conquering new victories. We feel their vigorous and indelible presence shining and palpitating, teaching us today, tomorrow and forever how to sacrifice our lives on behalf of the Party and the revolution.

Glory to the Day of Heroism

LIMA, Peru — Peruvian marines Thursday stormed an island prison, quelling an uprising that killed at least 250 Maoist inmates, a member of the nation's Cabinet told The Times. At least 10 troops were killed.

The final assault at El Fronton prison leveled a two-story concrete building in which a small band of the guerrillas had taken refuge, the minister said.

El Fronton, three miles off the coast, and two mainland prisons had been seized at dawn Wednesday in coordinated revolts by members of a Maoist guerrilla band called Sendero Luminoso (Shining Path).

The Cabinet minister said at least 100 prisoners died in an early morning attack by troops and police at Lurigancho prison in Lima.

By nightfall Thursday, at least 70 dead prisoners had been identified at El Fronton, with the final count at the three facilities expected to rise sharply to a total of around 250, the minister said after a Cabinet meeting with President Alan Garcia.

The minister, who asked not to be identified directly, said government casualties in a day of savage fighting included at least 10 dead, including a number of navy and marine officers.

"At El Fronton terrorists died singing, 'The people will overcome,' " the minister said.

A government communique Thursday had reported 124 dead in Lurigancho and 30 at El Fronton with "an unknown number trapped or buried in tunnels, at least one of which led to the sea."

Two inmates died and four others were wounded in an assault by police on a third facility, called Santa Barbara, which houses about 60 women guerrillas in a converted house in Callao, Lima's port city. A government statement announcing Santa Barbara's recapture said that inmates used weapons and high explosives to combat police.

Three hostages, including the warden of the women's jail, were rescued, the government said.