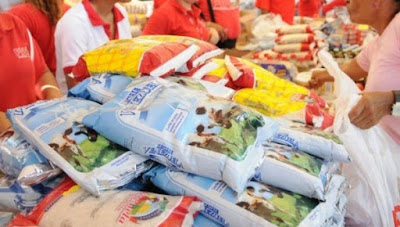 The local Committees of Supply and Production (CLAP) in Venezuela are the
new form of popular organization responsible, together with the Ministry of
Food, for the distribution house to house of the basic products.

House to house representatives of organized communities, carry bags full of
food consisting of various products. The new implementation that has served
580,000 families across the country, strengthen the joint work of popular power
and the Government towards ensuring the feeding of the people.

The solution to the current situation may not be as it is raised by some scholars
of the economy, freeing the exchange rate and prices and leaving wages
submerged.

Of those recipes there have been many in Latin America and they only have
given our peoples misery and exclusion, among other social dramas from which
we have not recovered yet. The solutions had to emerge from the people, to be
executed with the people and for the people, as it always was promoted the
commander Chavez, like are the real leftist policies, to the extent that the new
societies rise.

Thus it has been forming the local committees Supply and Production (CLAP)
in an increasing number of different Venezuelan communities, as a mechanism
against shortages and speculation led by the social scum that has stifled the
Bolivarian Republic of Venezuela throughout its existence: the parasitic
bourgeoisie who have lived off oil income, who do not even produce nor work,
who buy very cheap outside to sell very expensive here inside that the only it
does is intermediate in the distribution chain. The CLAP constitute the new form
of popular organization responsible for the distribution house to house of the
basic products. Each CLAP is made up of a representation of the National Union of Women
(UnaMujer) Battle units Bolivar-Chavez (UBCH, a grassroots organization of
socio-political articulation), Francisco de Miranda Front (FFM organized youth)
and the communal councils made up by the different communities.

The CLAP are certified by the Ministry of People's Power for Communes and
Social Movements to prevent acts of bureaucracy and corruption, and to have
an effective record of how much food and other subsidized products are
distributed and where they arrive.

The CLAP is a state policy with defined
objectives, to ensure that food reaches to the people and to support the
production.

The CLAP do not restrict the supply in private chains of distribution
such as supermarkets, but, 50% is distributed in the private network and 50% in
the CLAP.

At the same time, the CLAP have become the ideal tool to get directly to the
people the production of small and medium producers, which in this way they
get to break off from the speculative market that pays them a pittance for their
crops, but then it sells the food at very high prices to the population.

In addition, the CLAP -along with the Ministry of People`s Power for Urban
Agriculture- are organizing communities to develop vertical and agropónics
orchards and intensive production in small urban, suburban and peri-urban
areas spaces, so as to allow the crops quickly and without intermediaries reach
to the sectors of the population who need them most.

The Venezuelan opposition has shown that its participation in the economic war
is direct at the attack to the CLAP and promoting actions of sabotage of the
mechanisms of production and distribution.

Several of its regional and local leaders have been involved in the assault and
looting of deposits from the public network of distribution dependent on the
Ministry of Food and organizing demonstrations (reduced in number but full of
an extremely violent speech) against the very existence of the CLAP.

The Venezuelan people, however, seems to have found again the path to rout
to the war that have right-wing sectors allied to the parasitic bourgeoisie and the
American empire, as well as move the Bolivarian Revolution forward in the
construction of socialism. 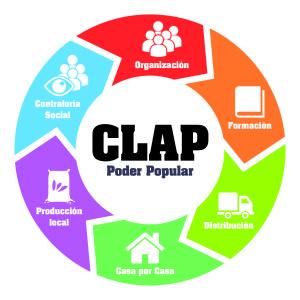