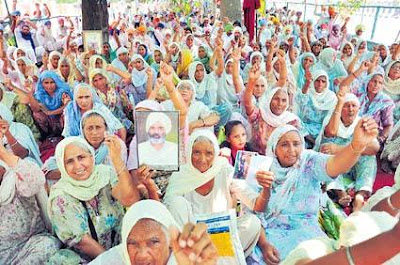 SALUTE THE DETERMINATION OF BKU UGRAHAN AND HOMAGE TO MARTYR RALLA SINGH DODRA .

MAY JUSTICE BE WON FOR ALL ALL FAMILIIES OF SUICIDE VICTIMS.SALUTE VICTORY FOR FAMILY OF DODRA BECAUSE OF PROTRACTED STRUGGLE.

The BKU Ekta Ugrahan,an organization of landed peasantry is making some kind of history by continuing it's agitation for over 26 days.

It has displayed the resilience of an army battalion and withstood all opposition like a boulder in a gale.

Few struggles of the landed peasantry in recent years have reached such a level of intensity.

Above all it has been a sword in the flesh for the ruling classes.

A peasant activist Ralla Singh Dodra who was a veteran in the movement expired.

He was fully fit before the start of the protest but the agitation took the toll out of him.

A great victory was won when the family of victim Ralla Singh Dodra won a compensation award.

This victory has political significance in the struggle for democratic rights .

The organization exhibited mastery in adopting correct form of struggle .

It should win the support and admiration of people worldwide.

Sadly the state govt.is not yielding to their just demands.

After protesting for four days over the death of a labourer at the farmers’ protest site, the farmers union under the banner of BKU (Bhartiya Kisan Union) Ekta Ugrahan today succeeded in getting compensation of Rs 10 lakh, along with a job for a family member and debt waiver for the deceased, who reportedly died of heart attack.

The protest of farmers over their long-pending demands entered its 28th day today while they have decided to cremate the deceased after getting his post-mortem done.

A 75-year-old farm labourer, Ralla Singh of Dodra village in Mansa district, died on June 17 during the ongoing farmers’ protest in Bathinda. Soon after his death, his body was kept in the mortuary of the Civil Hospital.

Farmers decided that they would not get an autopsy done as long as their demands — compensation to his family, government job to his kin and waiver of debt — were not met.

Ralla had been participating in the dharna since June 5.

He is survived by his wife, two sons and three daughters. He was allegedly under a debt of Rs 50,000 and was protesting with farmers to support their demands that also included waiver of debt of farmers and farm labourers.

Farmers blocked the main GT Road yesterday for three hours and lifted the dharna after a meeting with SSP was held.Tribune News Service

Bathinda, June 19 Farmers today blocked the main GT Road over their demand for compensation of Rs 10 lakh to the family of labourer Ralla Singh, who died two days ago at the protest site and is yet to be cremated.

The farmers staged the protest only for three hours and lifted the dharna only after a meeting with the SSP was held.
They claimed that the SSP had assured them of arranging their meeting with the administrative official concerned to decide over the matter of compensation.

Heavy police force was deployed near the protest site. The farmers have continued their protest inside the park situated opposite to the District Administrative Complex.

They have been staging protest since May 24 and have not caused any inconvenience either to the officials or to the commuters and visitors.

During their last year’s protest, the farmers had blocked the same road for many days to pressurise the state government over their long-pending demands.

BKU Ekta Ugrahan district president Shingara Singh Mann said, “Around 2 pm, we shifted our protest on to the main road to pressurise the government for Rs 10 lakh compensation to the family of deceased Ralla Singh, who died during the protest. We have not blocked the road this time unlike the last year for our long-pending demands. However, we will continue our protest at the park situated outside the District Administrative Complex.”

The body of the victim labourer would not be cremated until his family receives compensation and a job for his family member, he added.

Farmers are demanding a solution to the stray cattle problem; Rs 40,000 as compensation for the damaged wheat crop due to the fire caused by short circuit as a few farmers whose crop was burnt reportedly committed suicide; round-the-clock power supply ahead of the paddy season; quashing of false cases against the protesting farmers and compensation to those injured or dead during the farmers’ agitation.

They also demand the implementation of the Swaminathan report; waiving of the debt of farmers and farm labourers, who are unable to pay their loans; paying of compensation of Rs 5 lakh each immediately to the families of suicide victims; survey of suicides from 1990 onwards; release of motor connections to farmers on government expenses; full compensation of Rs 40,000 to farmers who faced damage to the cotton crop, following the whitefly attack; and making laws in favour of farmers instead of corporate houses or arhtiyas.

Heavy police force was also deployed near the protest site. They have been continuing their protest since May 24 without causing any inconvenience to administrative officials, public or visitors to the District Administrative Complex.

BKU Ekta Ugrahan district president Shingara Singh Mann said, “The government has agreed to give Rs 10 lakh compensation to the family of the deceased, besides giving a government job and waiver of his debt. A meeting with the SSP, SP (City) and ADC Bathinda, who is the officiating Deputy Commissioner, was held today.

For our other demands, the agitation will continue till the government fulfils them.”http://www.tribuneindia.com/news/bathinda/deceased-labourer-s-family-gets-compensation-job/254467.html Bathinda, June 15 Staging a protest against the state government over their long-pending demands, farmers have been sitting in front of the District Administrative Complex, Bathinda, since May 24. A number of victim families have been raising their voice against the government for its ‘failure’  to curb suicides and to provide compensation to the victim families, whose family members committed suicide.

Baltej Kaur, a resident of Bhamme Kalan village, who is waiting for compensation, looking at the picture of his husband, who committed suicide in 2009, narrated her story and said, “It was the dark night that left our future too in the dark. It became difficult for me to handle the situation with all three daughters when I saw that my husband Dyal Singh had consumed a poison on September 20, 2009.

It was due to debt that my 50-year-old husband had owned in the last couple of years.”
She said, “It was the dark night that left  our future also in the dark. It became difficult for me to handle the situation with my three daughters when I saw that my husband Dyal Singh had consumed poison. My husband committed sucide due to the debt he had incurred.

I have been seeking compensation for my husband’s death for the past many years but no heed has been paid to it. Now, I have started singing a song over the death of both father and son in the family of the farmer.” “I never had a son and five years back I married off my all three daughters but I know the pain of the death of a breadwinner in the family.

Life becomes miserable for the family when the breadwinner ends his life. Farmers are being left with no other option when there are in continuously facing losses and pressure of the debt increases then farmer sees only one way out –suicide,” she expressed her feelings.

The large number of women is also taking part in the protest. The women can be seen energetically criticising the government and showing dedication over their demands. The protesters can be seen cooking and serving the food and tea.

Reminding their demands, Shinghara Singh Mann, president of Bathinda BKU Ugrahan, said, “. We will not lift up our protest until our demands are met by the government. The Swaminathan report needs to be implemented. The farming is becoming a non-profitable profession.

We will intensify our agitation if the government fails to meet our demands.” Farmers’ demands
Waiving of the debt of farmers and farm labourers, who are unable to pay their loans; paying of compensation ofRs 5 lakh each immediately tothe suicidevictim families Survey of suicides from 1990 onwards Release of motor connections to farmers at government expenses Full compensation of Rs 40,000 to farmers who faced damage to the cotton crop following the whitefly attack and making laws in favour of farmers instead of corporate housesor arhtiyas