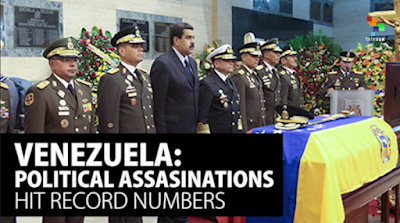 The right-wing coalition in Venezuela which now controls the National Assembly has bashed President Nicolas Maduro`s government over the head;  they claim to defend democratic values but the language of their own leaders reveals that they have no plans to do so themselves, and their goal remains the same: ousting President Maduro from power.

From The Caracazo to the 2002 coup, much of the political violence in Venezuela is intimately linked to right-wing political actors.  It is worth exploring the violence that factions of the right-wing have employed against the socialist revolution over the last two decades.

Their tactics to overthrow the revolutionary government has been the same, just to quote a few cases: they used a violent coup to overthrow President Hugo Chavez in 2002, leaving 19 dead.

Later that same year and early 2003, they continued with a months-long oil lockout that cost to Venezuela’s oil industry US$ 13 billion.

Then they refused to participate in elections, as well as they refused to accept the results in 2004, 2005, 2006, 2009, 2013. Then they resorted to violence in 2013 to oppose the outcome of democratic elections, leaving 7 people dead. Then they seeked to violently overthrow the government in 2014, leaving 43 people dead. As you can see the violence is always on the opposition’s cards, especially when it has exhausted all other means.

After years of being the opposition and vocally criticizing the constitution, which was drafted by the socialist party under President Hugo Chavez and passed by a popular referendum, the MUD seems to have developed a new fondness for it, demanding the administration of President Nicolas Maduro respect it to the letter in order to push through the sweeping changes they have planned.

The right-wing National Assembly continues to attempt to weaken the Bolivarian revolution and its gains through legislating and the option of a recall referendum is open, it’s possible that further violence may be kept at bay.

It is Noteworthy the U.S. influence and its interest of overthrowing the constitutional government of Nicolas Maduro, through lies and slanders using its global media influence.  We have no doubt that the United States is pursuing its old imperial agenda of seeking to control strategic resources in Venezuela and, in particular, to control its oil.

The US has not in the past been shy of using the strategies of destabilization and the promotion of military and other forms of intervention in pursuit of what is calls “US strategic or national interests”. One such strategy is now called “regime change” and that is what they are trying to do in Venezuela in coalition with its lackeys which now control the National Assembly.

Everybody knows that the issue is not “democracy” but oil and other geo-political interests. In the case of Venezuela it must be noted that following President Chavez first winning office in 1999 in a landslide electoral victory, the geo-political map of Latin America changed dramatically with progressive parties winning elections and forming the governments in Brazil, Bolivia, Ecuador, Argentina, Chile, Uruguay, Nicaragua and El Salvador, while progressive changes in Paraguay and Honduras were set back by constitutional coup d’etats.

A major reversal in Venezuela, therefore, can impact on the entire hemisphere.

We should defend the right of the people of Venezuela to be free of US imperialist bullying and US sponsored disruption. In particular, and we condemn the recent actions of the US against Venezuela and call for an immediate removal of all sanctions. Regime change is an unacceptable violation of the sovereignty of independent nations and must not be given any comfort.