Mikhail Markovich Borodin was born into a Jewish family in Yanovich, Belarus, on 9th July, 1884. He joined the Social Democratic Labour Party (SDLP) and as a supporter of Lenin, joined the Bolshevik faction in 1903. Borodin avoided arrest by escaping to Switzerland. In 1905 he moved to Riga where he became the head of the SDLP in the city.

From the middle of 1904 to the end of January 1905, Borodin lived in exile in Bern. In 1905 and 1906 he worked in social democratic organizations in Riga, and in 1905 he was elected a secretary of the committee of the Riga RSDLP organization. He was a delegate to the Tammerfors Conference (1905) and to the Fourth Congress of the RSDLP (the Unity Congress, 1906).

At the end of 1906, Borodin emigrated to England.

From early 1907 to July 1918 he lived in the USA, where he organized a special school for political emigres and actively participated in the Socialist Party of America, the left wing of which subsequently formed the Communist Party of the USA (1919).

In 1919 he was the first consul general of the Russian Soviet Federated Socialist Republic in Mexico.

From 1919 to 1923 he worked in the Comintern. From 1923 until July 1927, upon the invitation of Sun Yat-sen, Borodin worked in China as chief political adviser of the Kuomintang Central Executive Committee.

He was a personal friend of Sun Yat-sen. After his return from China to the USSR, he was deputy people’s commissar of labor, deputy director of Tass, and, from 1932, editor in chief of the newspaper Moscow News. From 1941 to 1949,

Borodin was also editor in chief of the Soviet Information Bureau. He was awarded the Order of the Red Banner.afternoon. 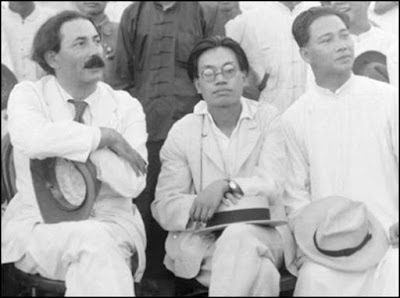