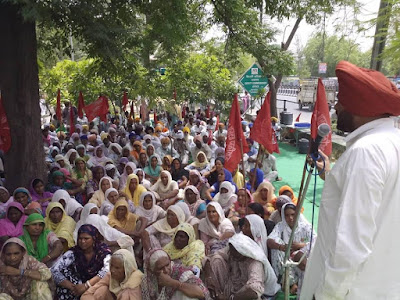 Today on June 9th the rallies or dharnas of joint front of organizations of agricultural workers at all the major district headquarters was a great success.

Although the numbers were not great due to it being the season of rest for sharecroppers o the response was overwhelming.

It was reminiscent of a burning flame erupting.

All the demands of the 1st ever rally at Chandigarh in March this year were voiced .

The demands raised were for

1. Giving rs 500 minumum wage to the agricultural labourers who today get around rs 250for daily work.

2. For implementation of the land act in 1972 which ensued 17 acres of land to every labourer which has not been implemented till today.

3. For giving work all the year around 365 days instead of 100 days like today

4. For distribution of 5 malas of land to every agricultural labourers .A mala comprises around 272 ft of land.

5. Compensation to all families of suicide victims.

6. For repealing all black laws impeding progressive movements.The meticulus grassroot preparation could be gauged from the intensity of the participants.

Agricultural workers organizations participated in 20 districts of Punjab with the maximum mobilization in Bhatinda of around 600 people and Sangrur of about 450.

As it was now resting season mobilization was not at its's peak but still it was a qualitative success with an average of about 10 peasants coming from around 100 villages.

The leading mobilizer was the Punjab Khet Mazdur Union.In Sangrur they were mainly mobilized by the Krantikari Pendu Mazdur Union.Earlier the author had witnessed some of the painstaking work to arouse consciouness in villages in Sangrur.

I also recommend readers to read bout the plot captures initiated by PMKU and the recent work of the Pendu Mazdur union.. On the agricultural labour front last year a series of continuous agitations were organized by the Punjab Khet Mazdoor Union.for plots.

They had the support of the B.K.U.(Ugrahan).On 3rd March 2015 a stir was launched with dharna sheld in Mansa,Sangrur,Faridkot,Barnala.Moga and Bathinda town .

With the demand of plots on Februray 26th in Muktsar earlier   dharna was launched.From the office of the D.C.in Muktsar on 8th March in Lambian agitation was launched where around 2000 people were mobilized.The agitation spread like wildfire with flag marches were held in support  in 266 villages in Bathinda,Barnala,Muktasar,Faridkot and Mansa .

In some of the villages the dagaitation persisted for 3 days.It led to a new unit opf the P.M.K.U being formed in Barnala.2 women block units were built in Bathinda and Mansa districts.The participation of the women’s team was remarkable  who in one day traversed 5 villages forming 9 units.

Overall 150 plots were captured in 7 villages during the agitation.After the call for plots on 20th Fbruary the mobilization level was 2100 in Barnala,2200 in Mansa.2200 in Moga,2500 in Bathinda and 3500 in Sangrur.The youth also played a remarkable role in giving solidarity.

In Lambi the P.M.K.U resisted the attempts by the police to suppress their protest in the road to Badal village.The police tried to arrest them but were virtually forced to retreat because of the intensity and spirit of the peasantry.,who defied them like a boulder. Photo of Laxman singh Sewewala,leader of PMKU dressing gathering in Bathinda district headquarters
Posted by nickglais on 6/11/2016 02:24:00 PM