UK : EU Referendum : Why I'm voting to leave the EU evil empire and why I think every worker should do the same by Steve Hedley 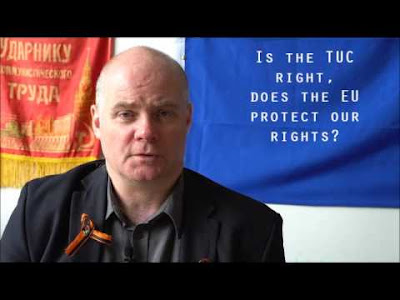 We in the RMT are a union of 80 000 workers that organises train workers, Tube workers ,bus ,taxi ,offshore, road transport workers and seafarers.

You may have been forgiven in thinking that the right wing were the only people who were arguing for a British exit from the European Union.

News reports concentrate almost exclusively on the Brexit campaign led in Britain by racists like Farage, and racists like Boris Johnson and the right wing of the Tory Party.

We have no association with these people at all. They are sometimes like a stopped clock which are right twice a day, but for all the wrong reasons.

We want to come out of the European Union because we want to protect Workers rights.

If we look at the philosophical and political reasons why the European Union was formed we can see that it a capitalist entity ,a completely ruthless trading block ,in competition with other trading blocks ,including developing countries .

As early as 1957 the European treaty outlined the absolute necessity of the free movement of Capital ,labour services and the pre-eminence of the free market economy within the borders of the signatory states.

This completely rules out two of the fundamental bases of socialism i.e. the need for a planned economy and the control over the movement of capital.

To change this treaty all 28 current European states would have to unanimously agree the changes.

The other purpose of the E.U was that it would form an economic bulwark against the Soviet Union.

Of course those arguing to remain in the EU in Britain will correctly point out that the conservatives led by Thatcher and after that the Labour government brought about privatisation in all the major utilities Gas ,Water ,Electric ,telephone and of course the Railways.

However what the EU does is institutionalise these privatisations and does not allow nation states to reverse them.

Take the rail industry for example What the European Fourth Railway Package does is to institutionalise privatisation and enshrine it in European law which has precedence over every countries national law.

Companies would be able either to offer competing services, such as a new train service on a particular route, or to bid for public service rail contracts through tendering.

The proposed changes would make competitive tendering mandatory for public service rail contracts in the EU."

Even if we had a Left wing government elected in Britain tomorrow, if Jeremy Corbyn was Prime Minister, he could not renationalise the railways and stay in the European Union.

In our Maritime industry we have seen the obscene spectacle of Portuguese workers, our brothers and sisters, working in British ships in Southampton being paid less that 3 pounds an hour, which is less than half the national minimum wage. 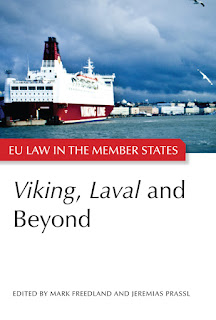 This is completely legal under European law which in the Viking Laval judgements stated that a worker can work in a foreign country and be paid the minimum wage in their own country and not the much superior wage of the host country.

In essence this is what the EU is all about. It’s a bosses club, a rich capitalist club that want to destroy workers’ rights and workers terms and conditions.

It seeks to open up markets to private capital that have previously been closed to it because they were state run.

We welcome any worker from across Europe and indeed across the world.

We have far more in common with workers from everywhere than with our bosses, and we want those workers paid on the same terms conditions and pay as British workers.

Our opponents want to say that we are racists for demanding the workers to have equal rights.

That is a slur that is not the truth.

It’s part of a" project fear "to intimidate workers especially those from ethnic minorities in Britain into voting to stay in the European Union.

The liberalisation package that the EU is demanding by 2020, is the reason why France in on strike at the minute, would be applied in every European country.

Like in France the need for capitalism to maximise its profits means deregulation ,lengthening the working week ,cutting pensions, introducing flexible working conditions including zero hours contracts for workers throughout Europe.

We have the appalling example of an American company, Uber, registered in Holland, taking the Spanish government to the European court because, they say, they are restricting their trade.

The actions of Uber of course will be the template for every other multinational that wants to drive down terms and conditions.

If a government tries to protect its workers, this company will bring this government to the European court.

There are those who argue that the European Union is reform able .This argument may have held some water before we say the treatment of Greece, where the troika imposed austerity by threatening to pull the plug on the Greek economy if the government refused to implement anti working class austerity measures.

The European commission ,IMF and world bank have in effect subjugated elected national governments by threatening to destroy countries who did not comply financially. In Greece and Italy we had the grotesque imposition of unelected European overseers to run the affairs of the countries.

In Ireland we had the suspensions of collective bargaining in order to comply with EU demands and the indignity of workers having to pay a recession tax in order to meet arbitrary EU set targets.

This is the supersession of democratic norms (even bourgeois democratic norms) by the unelected ,unaccountable anti democratic European commission which consistently produces dictates completely contrary to workers interests.

I would like to end by saying that this year is an historic year for me as an Irishman.

One hundred years ago, a couple of thousand Irish people rose up in 1916 and shook the chains of the British Empire.

It’s my fervent hope that in 2016, the peoples of France, of Germany, of Spain,Greece all the peoples of Europe, will raise up against the dictatorship of the European Union.