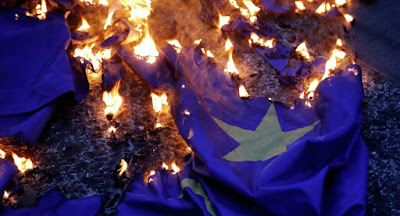 Yr Aflonyydcwh Mawr says the British Establishment is taking a kicking in EU Referendum as pound and euro drop and BBC has confirmed leave the EU has won the referendum.

From our Yr Aflonyddwch Mawr conversations in the Valleys of Wales there is very deep working class anger at all establishment Parties.

There is truely a Great Unrest which we have tried to give a progressive direction in the Yr Aflonyddwch Mawr.

There is a fight for the progressive soul of Wales and we are ready to do combat for Independence and Socialism.

We do not underestimate the struggle ahead but the process of the smashing of the Neo Liberal European Union has began not just in UK but also throughout Europe.

We remember in the Great Unrest in Wales before the First World war when there was also a dark side of racism but class consciousness overcame that division as it will again in the Welsh valleys,