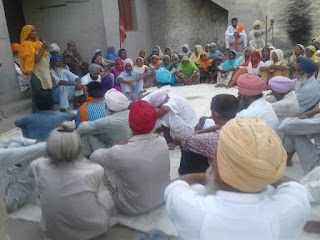 
The landless dalit agricultural workers in Punjab face the wrath of social tyranny and social boycott.

Although they need the support of the landed peasantry they crucially need an organization of their own and a movement representing it's demands.

It created the sensation of a spark turning into a prairie fire or several streams converging into an ocean.

The hearts of the landless agricultural workers argued like a tornado erupting opposing their tormentation.

The main demand was for 1/3rd right in the Panchayat.

As i had earlier written the demands of dalit labourers after  for minumim wage of rs 500,work all the year around,plots of 5 marlas of land to every family ,1/3 right in every panchayat,proper toilet and medical facilities,

Today around 3500 people congregated in Sangrur district,around 1500 in Jalandhar and about 1500 in Moga.Accordin to Naujwan Bhrat Sabha and ZPSC activist Rupinder Saingh Chuanda of Malerkotla village the rally was a resounding success in awakening consciousness with the message taken far and across.

It is a stepping stone towards success and if the demands were not met within a week the protest would be re-launched.

Earlier heroic protests  were led against arrest of activists a week ago.

Police had arrested the ZPSC leader PIRTHI LONGOWAL while he was going from his village to another village to attend a meeting related to 7th June rally .

Police and state want to make the movement leaderless ahead of 7 june rally.

In village Guwara (Teh Malerkota Sangrur)Earlier ZPSC leader  SURJAN SINGH JHANERI  was arrested and sent to jail by police for spearheading movement of dalits to get their constitutional right on land.

Goons of ruling akali dal and rich landowners of the village and from adjoining villages attacked the dalits with the connivance of civil administration .

There were 130-150 goons. In this attack several persons associated with ZPSC were injured and admitted to hospital.

After this attack peoples protested in front of Amargarh police station and demanded  the arrest of culprits in this attack. ZPSC condemn this attack and continue this struggle.

In village Bharo (District Sangrur) Dalits are successful under the leadership of ZPSC to get the lease of land at 20000 per year at concessional rate after struggle. people got the 27.5 acres of land that belong to them and where co-operative farming will be practiced.

It must be mentioned that prevailing market rate for ONE ACRE LAND lease is 40000-50000.

Struggle will continue to lower the lease rate. In Village Khokar district Sangrur Dalits farmers are able the secure the land lease at 13000 per acre that is reserved for it last year it was leased at 21000 per acre. Govt moved back from its stand that lease prices will not be slashed.

It is a victory of Dalits organized under ZPSC

In second place Village Bohpur sangrur Dalits also secured land lease at 18000 per month while prevailing market price is 45000-50000. it is also couple of thousands less than last year.

The success of protest was result of meticuluos ,painstaking work of activists of Naujwan Bharat Sabha and Pendu Mazdur Union.,literally lighting red lamps all over.Heartening to witness the participation of women .

The support of youth and student forces is also of political significance.

Overall one has to give great credit to the party forces of C.P.I.(M.L.) New Democracy for this event.

It is a lesson in how mass preparations and struggles are such an important component in a revolutionary movement.

The struggle reflects a general protracted nature with continuous swings.

The democratic protests against arrest of activists is of great importance.

The  arrest of important activists is an aspect to how the govt treats genuine democratic movements.

It must receive the applause of all democratic sections.