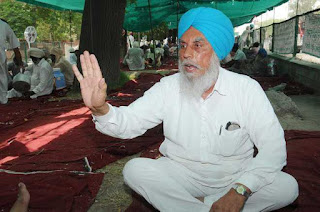 
LONG LIVE HEROIC STRUGGLE AND EFFORTS OF BKU -UGRAHAN.NO ORGANIZATION HAS CONTRIBUTED SO MUCH TO THE LANDED PEASANTRY OR CREATED SUCH STRONG MASS MOBILIZATION IN THE POLITICAL MOVEMENT OF PEASANTRY IN PUNJAB.

SALUTE BKU UGRAHAN FOR ORGANIZING HISTORIC STRUGGLE WHICH WILL BE REMEMBERED FOR EVER IN THE ANNALS OF DEMOCRATIC PEASANT STRUGGLES.

SALUTE THE DETERMINATION OF THE PEASANTRY DISPLAYING NERVES OF STEEL AND UNFLINCHING COMMITMENT.

It has rejected electoral politics or alliances wit political parties,opposed religious fundamentalism tooth and nail,done it's utmost to build the broadest base for democratic movement and above all inspire other sections like lawyers to organize.

The author has witnessed some of the upheavals of the BKU-Ugrahan be it struggling for compensation for families of suicide victims,for cancellation of debts.,against rape of women etc.

No organization in Punjab in the revolutionary camp can mobilze forces as much as the Ugrahan faction.

It also has built up a strong women's wing and significantly during the martydom memorial of Sadhu Singh Takhtupura amongst the 12000 people,6000 comprised women..It has also given strong moral support to the agricultural labourers.

In solidarity against Operation Greenhunt it has launched significant support.

In recent months it has even prevented political leaders from holding meetings promoting religious sectarianism.

The interview below reflects how this organization grew from the roots and it's significance in the struggle in Punjab.For 14 days it has launched a protest in Bhatinda town unrelentlessly fighting ,resembling the resilience of an  army batalion fighting against death defying odds.

The struggle depicts how even the landed peasantry are victims of the semi-feudal,semi-colonial system amongst whom many have committed suicide

Though farmers are protesting since May 24 in front of the District Administrative Complex here, the stir had failed to move government. It had even failed to hold a meeting with farmers to discuss their demands.

They are protesting in support of their demands and raising anti-government slogans.
Farmers had also condemned the meagre increase of the MSP of paddy and other crops and demanded the implementation of the Swaminathan report to save the farming and farmers as well.

While holding pictures of their near and dear ones who had committed suicides following alleged debt, family members of suicide victims are raising slogans against the government and are demanding formulation of pro-farmer policies that could curb suicides among the farmer community.

“Until the Swaminathan report is implemented, the farmers cannot be saved. The wrong policies of the Centre and the state government are collectively responsible for the suicides of farmers,” said BKU (Ugrahan) Bathinda president Shingara Singh Mann.

He said: “We would not withdraw the protest until our demands are met by the government. We want suicides be contained and this is only possible when agriculture becomes a profitable occupation.

Farming is becoming a non-profitable profession and farmers do not know any other work. We would intensify our agitation if the government fails to meet our demands,” said Mann.

They are demanding to waive off the debt of farmers and farm labourers who are unable to pay their loans, paying of compensation of Rs 5 lakh each immediately to suicide victim families; survey of suicides from 1990 onwards; release of motor connections to farmers; full compensation of Rs 40,000 to farmers who faced damage to their cotton crop following whitefly attack and making laws in favour of them instead of corporate houses or arhtiyas. Besides, farmers are also demanding a solution to the stray cattle problem
.
They are also demanding Rs 40,000 as compensation for the wheat crop damaged because of fire which broke out due to a short circuit as a few farmers whose crop was burnt had reportedly committed suicides following the incident.

Round-the-clock electricity supply ahead of the paddy season, quashing of false cases against protesting farmers and compensation to those injured or dead during farmers’ agitation were among the other demands.