Who owns the Land in the Ukraine ? by Elizabeth Fraser 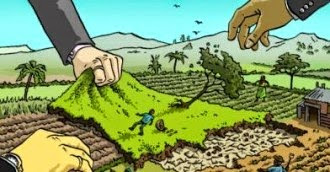 May 14, 2015
The fate of Ukraine's agricultural sector is a cause for alarm. As stated in the report of the Oakland Institute in the last year, more than 1.6 million hectares of Ukrainian lands were under the control of foreign corporations. Further studies will identify the sources and new foreign investment.

Thus, according to some estimates, the total area of ​​agricultural land in Ukraine, controlled by foreign companies, it is now more than 2.2 million hectares. In addition, studies were identified significant "gray areas", where it is difficult to determine who is a landowner and who controls the land.

Foreign companies and the shareholders behind the acquisition of land in Ukraine, scattered around the world. The Danish company Trigon Agri, for example, controls more than 52 000 hectares. This company was founded in 2006 with start-up capital "wealthy people" from Finland. The company is trading in Stockholm (according NASDAQ), and its largest shareholder is the: JPM Chase (United Kingdom, 9.5%); Swedbank (Sweden, 9.4%); UB Securities (Finland, 7.9%); Euroclear Bank (Belgium, 6.6%) and JP Morgan Clearing Corp (United States, 6.2%).

United Farmers Holding Company, which is owned by a group of investors from Saudi Arabia, controls 33,000 hectares of agricultural land in Ukraine through the company Continental Farmers Group PLC.

AgroGeneration, which holds 120,000 hectares of Ukrainian farmland, and is incorporated in France, and 62% of its shares controlled investment company Texas SigmaBleyzer.

American pension fund NCH Capital holds 450,000 hectares. The company began operations in 1993 and now boasting that was one of the first foreign investors in Ukraine after the collapse of the Soviet Union. Over the past decade, the company systematically took in rent small plots of land (ranging from 2 to 6 ha.) Throughout Ukraine, enlarging and then combining them into large farms already operating as industrial production. According to one of the main partners NCH Capital, George Rohr, the lease gives the company the right to buy agricultural land now rented as soon as Ukraine will lift the moratorium on land sales.

The other subgroups such companies Ukrainian leadership - it is often companies with mixed Ukrainian and foreign investment registered, usually in "tax havens" such as Cyprus, Austria and Luxembourg.

For example, UkrLandFarming controls Ukraine's largest land bank - 654 000 ha in total. 95% of the shares are in the hands UkrLandFarming multimillionaire Oleg Bakhmatyuk, and the remaining 5% were recently sold to Cargill. Similarly, Yuri Kosyuk, ranked fifth in the list of the richest Ukrainians, he is the CEO of Mongolia, one of the largest agricultural companies, which holds 360,000 hectares of agricultural land.

Since the beginning of the current political crisis in Ukraine, some of these companies (mainly Ukrainian) also proved crisis-ridden. One such company is registered in Cyprus "Mriya Agro Holding", which controls nearly 300 000 hectares of land. In 2014 the company's website (which is no longer available) contained information that 80% of "Mriya" has a family Guta (citizens of Ukraine), holding major posts in the leadership of the company. The remaining 20% ​​of the shares are registered for the Frankfurt Stock Exchange.

According to news agencies, in the summer of 2014, the company defaulted on payments for two large Eurobonds, which calls into question the very future of the company. The company first gained the support of the American Blackstone Group and Ukrainian Dragon Capital, however, only a month, these companies have refused to support the "Mriyu", and after them - and the international company for financial services and audit Deloitte.

Then it convened an international committee of bondholders, which consisted of several American and British investment groups (including CarVal Investors - Investment subsidiary of Cargill), which together own more than 50% of the debt, "Mriya" on Eurobonds (maturing in 2018 th) and 15% of liabilities on Eurobonds maturing in 2016. Thus, the future of the company "Mriya" vague and some sources suggest its imminent bankruptcy.

Another Ukrainian company registered in "tax havens" is also experiencing difficulties. It Sintal Agriculture Public Ltd (registered in Cyprus, conducting trading on the Frankfurt Stock Exchange since 2008, and controls 150,000 hectares of agricultural land in Ukraine). She stopped share trading January 29, 2014 the first "until further notice" after towards her bankruptcy proceedings were initiated. In 2013, on its website (he, too, does not work) stated that 36.3% of the shares of this company are in free float.

The probability of bankruptcy of corporations and foreign investors involved in the crisis-management raises the question about the future of their control of agricultural land. It is not yet clear how the issue will be decided on the control of these lands, and what will be the role of Western companies and funds that invest in Ukrainian companies bankrupt.

However, based on the experience of neighboring Romania, we can assume that if all will develop in Ukraine for the same scenario, there will be a transition of agricultural land in Ukraine under the control of foreign companies.

In Romania, there was a similar story the dissolution of collective farms, collective land distribution to former collective farmers and the introduction of the moratorium on sale of agricultural land. However, loopholes in the legislation of the country made ​​it possible for foreigners to establish control over land through bankruptcy. As reported, on the basis of documentary evidence, Judith Buñol (the  " concentration of land, looting of the land and the people's struggle in Europe "), the bankruptcy of the national agricultural enterprises paved the way for the establishment of foreign control over agricultural land in Romania.

It is not yet entirely clear whether the Ukraine implemented the same scenario. Nevertheless, Romania gives us a lesson, stressing the importance of attention for all transactions relating to agricultural land. In addition, by itself "muddy" situation of land ownership in Ukraine also raises a number of questions. And probably the most important question is this: can a large concentration of all Ukrainian lands in the hands of a few oligarchs and foreign corporations to the benefit of this country, its people and its economy?