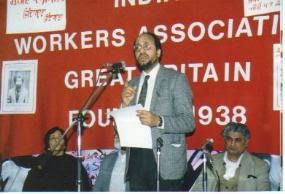 CHALLENGES FACED BY THE WORKING MEN, WOMEN AND THE YOUTH

6. Stop the Anti-immigrant xenophobia and the racist election campaign: For the last fifty years or so immigration has been an issue in every single general election.  The abominable UKIP Party has now given lead in the raciest campaign against the immigrant population. Immigrants, especially from Asia, Africa and the Caribbean, are being blamed for the shortage of jobs, housing, hospital beds and lack of places in schools. With the ongoing civil wars in Syria and Somalia, demonisation of Muslim population is on the rise. With UKIP and the notorious English Defence League we are experiencing the return of racist propaganda from the 1960s and 1970s. The Tories, Liberal Democrats and the Labour Party are trying to out-manoeuvre each other by coming up with new figures and ways of curbing immigration. They want to take the racist lead from UKIP. Just for the sake of wining the votes of the native British population, every parliamentary party is racing with each other, trying to pit the native white working class against their own brethren from other ethnic backgrounds. On the other hand, the Eastern European immigrant working class, particularly the Romanians, are portrayed as criminals and thugs. UKIP leader Nigel Farage (other parties are no exception) is campaigning that immigrates are the cause of unemployment, where as the truth is that unemployment and economic recessions are inherent characteristics of their own capitalist system and are inevitable. The fact that the multicultural Britain that exists today has been created through generations of immigration is completely being ignored. Little is said about the substantial contribution made by the immigrants to the British economy and culture.
7. Implement the Section 9(5)a of the Equality Act 2010: In March 2013 Parliament agreed the legislation to outlaw Caste discrimination in some of the Asian population of Britain by considering Caste as an aspect of Race. The Government has been failing the will the of Parliament by not bringing into force Section 9(5)a of the Equality Act 2010. There have been numerous reports that points to the wide spread existence of discrimination based on Caste in the Britain. The Government is failing the victims of Caste Discrimination by not making this practice illegal immediately.
Indian workers’ association, Great Britain appeals to the working men, women and youth of this country to unite to fight against the austerity measures, cuts in NHS, cuts in education, and cuts in welfare. We must all unite and challenge the politicians who come to us asking for our votes, on their anti-working class, anti-people, and anti-immigrant policies and the wars of aggression in the Middle-East and elsewhere. We must challenge this exploitative system and fight for a just society.
Indian Workers’ Association, Great Britain
Central Organising Committee
Charan Atwal (Chairman)                                                                             Lekh Pall (Secretary)
Posted by nickglais on 5/05/2015 12:57:00 PM