India : West Bengal "conviction" of Chhatradhar Mahato and three others - No Justice No Peace in Jangalmahal 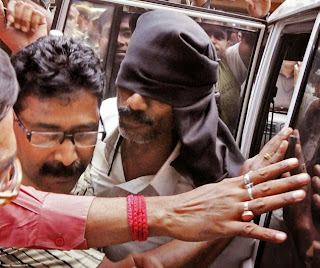 Four persons including Chhatradhar Mahato, convener of the CPI (Maoist)-backed Police Santrash Birodhi Janasadharaner Committee (PSBJC), were convicted by a court in the West Bengal’s Paschim Medinipur district on Monday for sedition and the Unlawful Activities Prevention Act (UAPA), 2008.

This is the first case in West Bengal where a court has held the accused guilty under UAPA, which was implemented in the State in 2009.

“Other than Mahato, Sukhsanti Baske, Sambhu Soren and Sagun Murmu associated with the PSBJC have also been convicted by the court.
Two others — Raja Sarkhel and Prasoon Chattopadhyay — have been convicted of sedition but the court absolved them of charges under the UAPA brought by the prosecution,” Mrinal Kanti Chowdhury the counsel of the accused told The Hindu.
The counsel said that while it was reported that Mahato was arrested by the policemen posing as journalists on September 26, 2009, the prosecution in its argument has said that Mahato was arrested on the said date after an explosion aimed at police patrol party took place near Birkara village.
Though the court rejected charges levelled by the prosecution against Mahato under sections of the Arms Act, it still convicted him under the UAPA and sedition, Mr Chowdhury said.
“Today those who are in power were associated with the movement (in Jangamahal) before 2011.
They accept the movement but are convicting those who were behind it,” Mahato told journalists while he was being taken away from the court premises.
The quantum of punishment, which in this case can extend up to life imprisonment, will be pronounced by the court on Tuesday.
Mahato was the public face of resistance against the Left Front government. He had worked closely with the Trinamool Congress and held joint rallies with party chairperson Mamata Banerjee before the TMC came to power in 2011.
The events were widely reported by the press before the TMC came to power.
After his arrest and the killing of polit bureau member of CPI (Maoist) K. Koteshwara Rao alias Kishenji, the Maoist lost their ground in the State’s Jangalmahal region.