The Not So Secret British Election Ballot Papers 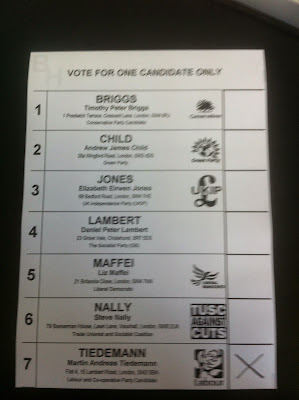 Democracy and Class Struggle publish this article as many people are not aware of these undemocratic practices of the British State and believe in the formal ritual of British democracy but not its actual practice.

If you ask an Election Officer at a Polling Station whether the number on the Ballot Paper can be traced to your name - he will say it requires a Court Order.

Therefore the British Election Ballot is not Secret one, despite the belief of millions to the contrary

UNDER the Representation of the People Act 1983 the Returning Officer, usually a senior official of the local council, has to ensure that all ballot papers, counterfoils and the polling clerks’ marked copies of the electoral register are safely deposited with the Clerk of the Crown in Chancery (a senior officer of the Lord Chancellor’s Department).


I DO NOT know what happens to the voting slips for Conservative candidates, after they have been counted, but in the mid-1960s those for communists were tallied against their counterfoils in the ballot books (just like cheque books) and those who had had the temerity to vote for a communist were identified from the electoral roll.
Their names were forwarded to Special Branch and to MI5, almost certainly as a matter of routine. The source for this information was a good one. He was a postgraduate student doing his doctoral research on local government in a Midlands steel town where he was attached to the town clerk's department. One day he opened a cupboard, looking for some documents, and found instead a large number of ballot slips, all of which were marked in favour of a communist candidate in the local elections. The town clerk returned and found the student with the slips and told him (knowing the student's safely right-wing views) that it was one of his regular chores to forward the names of communist voters to the Special Branch. As the town had a strong communist tradition it was a recurrent task for the town clerk and the slips had been put to one side until he had time to deal with them. The then student (my informant) saw nothing wrong with this procedure - which made his account the more believable.
Michael Wilson, Thame, Oxon