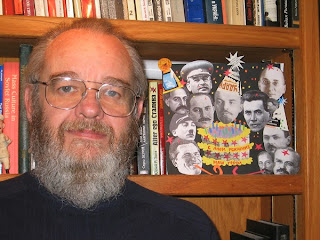 Ukraine as a new nation has to create a useable past, Arch Getty, Professor of Russian and Soviet history at UCLA told RT’s In the Now show. War criminals like Bandera, who killed a lot of civilians, are being praised by Kiev government now, he added.

RT: Mikhail Gorbachev said that snubbing the Victory parade is disrespect for the people who suffered enormous losses fighting Nazism. It's clearly not completely perceived this way in the United States. Why is that?

Arch Getty: ... For Americans it was something that they read about in the newspapers or something they heard about on the radio. For the Soviet people it was in their neighborhood, it was in their face- their houses were burnt, their houses were bombed, their neighbors were slaughtered, their family was killed. It had immediacy in their lives. But I don’t think Americans can really understand very well, because for us, in the US, it was something that happened somewhere else, but not for the Soviet people.

RT: If Obama came to Moscow, would this be perceived as weakness amid the current global geopolitical climate in the world?

AG: I don’t think it would be by anybody who fought in the war, or anyone who remembered the war, because it was a joint allied effort. I don’t think it would be perceived as a weakness by anybody who knew anything about the war. In fact, you could even see it the opposite. Having had his sanctions fail to resort to this kind of blockade it seems patty; it seems juvenile, especially given the depth of the loss that the Soviet people felt. You can almost argue that he looks even weaker by not going.

RT: What's the attitude towards this victory in the West now? Is it some kind of inconvenient fact when a lot of what we’re seeing now is to paint Russia as an aggressor, to sort of commemorate what should be a joint victory?

AG: I think it is an inconvenient fact. But for a lot of Americans it is even not a fact at all because they were taught in their schools frequently, that we, Americans, won the war. The Soviet effort has always been minimized here, and that’s happened even more lately. By the time we came ashore on D-Day in June, 1944, the tide had turned on the Eastern Front against the Germans for a year and a half. The Soviets faced 10 times as many German divisions, as we did in the West. That is not a fact for a lot of Americans because they are still living in ignorance of who did what, who turned the tide and what the scale of the thing was. And the more governments on all sides try to rewrite history for their own current purposes the worse that gets.

RT: Shouldn't this victory be bringing Ukraine and Russia together?

AG: It certainly should, but it is not, and it won’t because Ukraine as a new nation, a new state more than anybody else has to create a useable past, a useable history. And they have done so in the most glaring kinds of ways that the Ukrainian Prime Minister, [Arseny] Yatsenyuk has said that WWII was about the Soviet Union invading Germany. War criminals in Ukraine, Bandera, people who killed Jews and many others are being touted as national heroes there for current political needs of the Ukrainian leadership. I’m afraid these celebrations are not going to do that simply because of the attitudes that are being taken.