Anti-semitism is of advantage to the exploiters as a lightning conductor that deflects the blows aimed by the working people at capitalism.

Anti-semitism is dangerous for the working people as being a false path that leads them off the right road and lands them in the jungle.

Hence Communists, as consistent internationalists, cannot but be irreconcilable, sworn enemies of anti-semitism.

In the U.S.S.R. anti-semitism is punishable with the utmost severity of the law as a phenomenon deeply hostile to the Soviet system. Under U.S.S.R. law active anti-semites are liable to the death penalty.

Below Nazis Anti Jewish Propaganda from Der Sturmer in 1930's 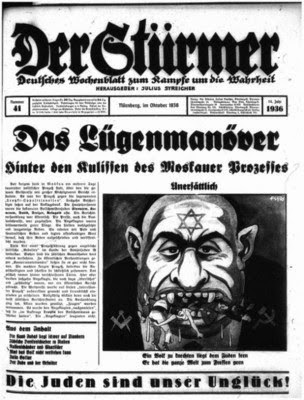 FOR AN EXCELLENT ARTICLE FROM AN AUSTRALIAN COMRADE ON STALIN AND ANTI SEMITISM HERE :

A Lethal Form Of Lying :
Notes on Anti-Semitism and Cold War Scholarship

Have you come across the 'Draft Theses on the Jews and Modern Imperialism' put forward by Ian Donovan, a former member of the CPGB. Ian Donovan was forced to leave the CPGB over accusations of anti-semitism. what are your thoughts of this:

The "over representatation" of Zionist Jews in the US bourgeoisie should not politically characterise the Jews as an ethnic group which Ian Donovan does in his statement or we enter the slippery slope of Jewish Capitalism/Imperialism not Bourgeois Imperialist Capitalism.

I hate Zionism but love Jewish Proletarians Read about one my heroes Mike Gold here : http://en.wikipedia.org/wiki/Mike_Gold

İbrahim Kaypakkaya's work in the 1970's is path breaking on the National Question and helps Maoists to orientate themselves and blend anti imperialist national and class struggle so relevant to struggle today.

Without the proper theoretical foundation of Marxism Leninism Maoism people like Ian Donovan will end up in the swamp of eclecticism on the National Question.

Here is a link to selection of Mike Golds writings

Also read about old comrade Maurice Ludmer who founded Anti Nazis League a Communist anti Zionist who would turn in his grave at what Gerry Gable has done to Searchlight which now attacks Communist anti Zionists labelling the anti semites and shamefully supports the Oligarch Kolomoisky in Ukraine.

Gable has retained an endearing affection for 'black-bag' jobs, as a means of gathering information on target individuals, ever since.