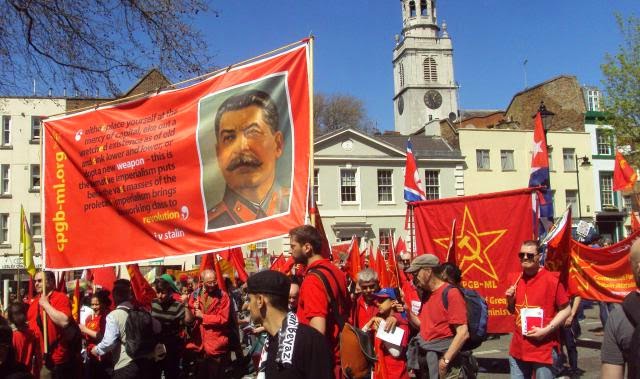 Democracy and Class Struggle offers a Red Salute to our class brothers and sisters in CPGB ML and to their political line against Labour Reformists and Trotskyists and Anarchists.
We have our differences with CPGB ML on the National Question in British Isles and Imperialism and some important questions of Marxism Leninism Maoism but they are contradictions amongst friends and not with the enemy.
Long Live Proletarian Internationalism.
Our Views are outlined in the May Statement which we signed below
RED AND INTERNATIONALIST MAY DAY!

Crises, wars, repression, oppression, unemployment, poverty!
Proletarians and oppressed people, let us unite and take the future in our hands!
Long live Revolution!
Imperialism continues crossing a deep economic crisis and unloading it on the proletarians and peoples of the world. They speak about recovery, but the only thing that recovers is the rush to profits, wealth and arms.

For the proletarians, poor peasants and other people’s masses in every country of the world, instead, we see unemployment, labour laws increasing precariousness, exploitation and slavery, misery, plunder of raw materials and energy resources, devastation of environment and territories. Youth without work are now the majority, in spite of their educational and cultural growth. New technologies are used to make more profits, intensify exploitation and the despotic command and control on labour and increase the destructive power of arms.

In the oppressed countries, workers, peasants and youth have repeatedly come out in the streets braving severe repression to fight back the attacks on their livelyhood; the peasantry, main force for the New Democratic Revolution, withstand the reactionary anti-peasants policies of displacement and annihilation and persist in the struggle for lands against old and “new” forms of semi-feudal domination, base of the imperialist rule.

In the imperialist countries the uprisings of youth and immigrants from Ferguson to Stockholm, to the banlieues in Paris, the general workers’ struggles, which often clash with the repressive apparatus of the State.All of this show that the revolution, as tendency and need, is increasingly emerging and clashes the reactionarization and fascistization of states and governments.

Wherever, in the struggles and people’s wars, the forefront role of women advances, to put an end to the heinous class and gender oppression that fills the streets of the world of rapes, femicides, and to demand a revolution for a true liberation. In order to face and prevent the people’s rebellion, imperialists, their States, their right or claimed “left” governments, respond with fierce repression, massacres, persecution; demagogy and plotting. They establish police states that rub out political, social and individual freedoms, in a vain attempt to stop the people’s wave and the revolutionary organization of masses.

They also employed the enticements of the electoral farce of reformist, social-democrats and revisionist in order to contain the rage of the mass within their reactionary system. These forces foster the illusion that some ‘pro-people’ government can overcome the ravages of the crisis; for instance, in Greece, highest expression of the crisis in Europe, forces of new social democracy as SYRIZA, come to power as a last resort, but they are not able to stand up to the diktats of European capital and banks or give response to the needs and struggle of masses. Also if the service done to imperialism by such fake left forces who misguide the masses still remain as a hurdle, in many countries the masses respond with the intensification of the class struggle and an increasingly massive abstention and boycott.

In Ukraine and Eastern Europe reactionary, also Nazi-like, forces advance, supported by US, EU and NATO, in a framework of inter-imperialist contention with Putin’s Russia. The masses are justly struggling against fascism and Western imperialism, but they need a genuine communist leadership to be not pawns of imperialist Russia expansionism.

The rebellion of proletarians and masses demands a radical change and the only means to achieve this is to overthrow, weapons in hand, the ruling classes and establish a new society free from exploitation, oppression and imperialism. Within the crisis become inter-imperialist contradictions sharpen and tendency to a new world partition war becomes more and more insistent – although the contradiction between imperialism and people and nation oppressed remains the principle contradiction  in the world – the revolution remains the main trend and is embodied by the potential new wave of the world proletarian revolution.

In order to become successful new democratic revolutions marching to socialism in the countries oppressed by imperialism, and proletarian and socialist revolutions marching to communism in the imperialist countries, the rebellions of masses need a genuine revolutionary communist party in each country, a united front of all the exploited and oppressed masses led by the proletariat and a revolutionary people’s army. Where the masses lack these instruments, their heroic and bold struggles are defeated and / or end to be prey of reactionary forces, always tied to imperialist system, that can not free them from the social, economic and political chains.

In the name of the war on terrorism, imperialism unleashes wars and domestic terror. But imperialism is the true terrorism, the monster that we must fight and overthrow. What in the world is worse than imperialism? Imperialism, especially US, intensifies the policy of war, invasion and aggression in Iraq, Afghanistan and fosters wars in Syria, Libya Yemen and throughout the Middle East and West Asia. They respond to the people’s revolts in the Arab countries by installing in power forces that continue the policy of the old tyrants and regimes, as in Egypt, in cahoots and alliance with the Zionist gendarme, Israel, and other reactionary regimes in the region, from Turkey to Iran, Saudi Arabia.

In these wars and interventions, they arm feudal and reactionary forces which then turn against them, bringing the war within the imperialist countries themselves with fierce attacks that undermine the security and strength of those States, within which there are masses and sections of rebel immigrants who hate imperialism. In the field where these direct and indirect interventions took place, imperialismcontinues applying the policy of Low Intensity Conflict (LCI) with agents and plots to put masses against masses, to divert the target of the struggles of the oppressed peoples from of their main enemy, at the aim of dividing the anti-imperialist united front, as now in Syria facing the Arab and Kurdish masses.

Where the ISIS advances, the masses fight and resist, as Kurdish masses, with a leading role of women, in the front row in Rojava, Kobane. But only by fighting with the People’s War, not only the ISIS but also imperialism and the reactionary regimes in the region, the masses can free themselves from social and national oppression.

The bourgeoisie and its sophisticated intellectuals, in the imperialist citadels as in the centers of culture in the countries oppressed by imperialism, sing the funeral of the working class and its ideology, powerfully drawn by Marx, Engels Lenin, Stalin Mao, but in every corner of the world we are witnessing a huge resumption of the workers’ struggle, classist and combative, that shakes the citadels of capital, also in China, as well as all countries of the alleged development of capital , the so-called, “emerging countries”.

In the imperialist system, big countries, such as Brazil, Turkey, etc. are crossed by strong struggles of workers, peasants and other masses and show how the economic rise of these countries under the rule of imperialism makes them “giant with feet of clay” and land of revolution. There is no place in the world that does not see tensions and sharpening of the class struggle. In this framework it is the People’s War, led by Marxist-Leninist-Maoist parties, the only strategic reference of the liberation struggle.

The People’s War in India, hitting directly at one of the major bastions of imperialism and reaction in the world, has roused great enthusiasm among the revolutionary masses all over the world and become a powerful internationalist rallying point. Together with the People’s Wars in the Philippines, Peru, and Turkey, it continues to undermine imperialism and shows the path to overthrow the system of exploitation and oppression of imperialism and the feudal reactionary forces and the construction of a new power and society.

The Marxist-Leninist-Maoists communists in the world must construct and strengthen Communist Parties to take up their tasks of leadership and development, ridding their ranks of revisionist and capitulationist tendencies, as Prachandism in Nepal, Avakianism in the US, the Right Opportunist Line, in all forms, in Peru, etc., without falling, at the same time, into the sterile petty bourgeois revolutionarism and dogmatism. The building of the communist parties must take place in the fire of the class struggle with close tie with the masses, in function of the revolutionary struggle for the power.

This May Day 2015 calls us to lift high and strong the red flag of communism and revolution in every demonstration, in every anti-imperialist struggle in the world, bringing and renewing with strength the slogan of: “Proletarians and oppressed peoples of the world, unite!”

Let us salute the martyrs of the people and revolution, let us support the struggle and free revolutionary and communist political prisoners around the world!

Let us take the future of communism in our hands!