India : Today we remember one year since Prof G.N.Saibaba was arrested by Harsh Thakor 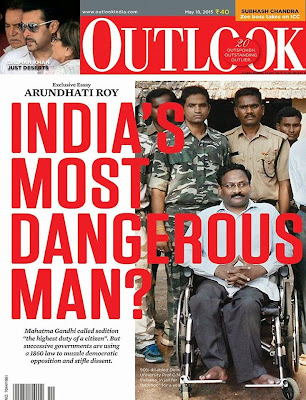 This article expresses the personal views of Harsh Thakor
The event has more significance to the Marxist Leninist revolutionary camp than any event as it was major attack on democratic rights.

A revolutionary democrat like professor Saibaba was arrested on grounds of being associated with the C.P.I. (Maoist).

In fact in the past the state has in several instances arrested democrats or assasinated them through the police force or political mafia in the pretext of curbing terrorism or 'maoism'.

What is significant is that although India cannot be termed fascist in the classical sense and posesses's features of bourgeois democracy it cannot be called a bourgeois or liberal state either.

True it allows freedom of expression in terms of publication of literature ,holding seminars ,press meetings,posters etc.It also allows Maoist publications or revolutionary democratic papers to be published or blogs to be posted.

However the government has also come down heavily on democratic movements as well as intellectuals.

Recently it attacked a meeting supporting the movement for self-determination in Kashmir.

Although not banned,unofficially the Revolutionary democratic front is banned being supressed all over the country.

Just because certain liberties exist which eluded people in fascist countries like Germany in the 1930's does not mean that we should take any form of liberalism for granted.

About 15 years ago the equivalent of Revolutionary democratic Front-the All India Peoples Resistance Forum could function more openly and none of it's office-bearers were attacked.

In recent months the R.D.F vice-president has been killed and it's joint secretary incarcerated.What is lacking is a strong democratic rights movement or organization that is not a front of an Marxist -Leninst group.

The formation of Democratic Front against Operation Green Hunt,Punjab is of special significance. and is playing the best role by any democratic forum in resisting the state repression.

It just heId 2 conventions in solidarity with Professor Saibaba. asked Varavara Rao and the Naveen Babu memorial lecture why the topic was called 'The ascendancy of fascism' and he explained that a liberal state would not be so repressive on peoples movements like in Assam .

He even sighted the example of the Forum of peoples meeting which was prohibited last September in Hyderbad.

However he did state that if we were classically fascist a public meeting would not be allowed.

We have to recognize that certain civil liberties still exist but be aware of fascist attacks looming with the resurgence of Hindu communal fascism.

Today even in Punjab mass meetings of peasant organizations are held principally because of mass support of people and not because of civil liberties in the constitution.

Unofficial democratic protests are even supressed in Punjab.Peasnt organization leaders feel that unofficialy there is no real democracy.

The attack on activists of the Kabir Kala Manch is another classical example with the state trying to extinguish the movement of Dalits.

I recall the days of emergency when organization for protection of democratic rights played a major role .

It asserted that the democratic rights platform should not be mixed with the party platform when a trend existed when the civil liberties platform was used for propogating Marxist-Leninist ideology.

The formation of the All India Federation of Organization for Democratic Rights in 1982 has significance in this regard.In the 1980's and 1990's so many civil liberties activists like Ramandham,Prabhakar Reddy ,Jappa Laxma Rao,T.Purushottam ,Gopi Rajanna were executed in the name of being naxalites.

Even forums like Rahul foundation or Bigul Mazdoor Dasta feel that the bourgeois state is slowly turning into a fascist one with the tentacles of Hindu communal fascism making it stronger.

Remembering a year after Saibaba's arrest democratic activists should be even more determined to challenge the state repression.

Very happy to see such an assembly as in Hyderabad today in the dharna demanding Saibaba's release.

Long Live the Peoples Movement against the arrest of Professor Saibaba! support the  vindication of democrats!