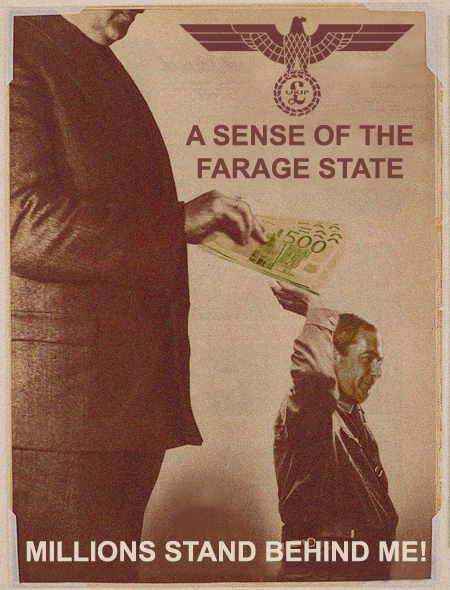 The UK Election and its ritualistic election politics are underway controlled and contrived by the British Media.

Democracy and Class Struggle  thinks it necessary to turn our attention to what is "new" in this Election to learn what deception and self deception bourgeois politics has in store for us today.

Leaving aside the Scottish National Party who we will address in another article the "new force" in English politics is the British Nationalist United Kingdom Independence Party which could get 4 million votes in this election.

UKIP is led by a spiv and wide boy called Nigel Farage a former commodity trader who has deep roots in the City of London  working not only at the London Metal Exchange but also at Drexel Burnham Lambert, Credit Lyonnais, REFCO and Natexis Metals - a true City of London insider.

UKIP  has attracted the financial support of Schroders Fund Manager Andy Brough and Hedge Fund manager Crispin Odey and of course the largest ever Tory donor Stuart Wheeler of City based IG Index has become an enthusiastic UKIP financial supporter.

From a firm city financial base UKIP has attracted some industry men like Paul Sykes of the Paul Sykes Group in the North of England to pay for some of his advertising past and present and a million pounds from former Tory donor Arron Banks of Brightside Insurance and "ex" pornographer and Daily Express owner Richard Desmond has chipped in another million - truly millions stand behind Nigel Farage.

The BBC has invited Nigel Farage on dozens of occasions on its flagship programme Any Questions where he poses as an outsider  - the BBC is very good at "grooming".

Nigel Farage has been well and truly "groomed" for "British" political leadership.

When the City of London Piper calls the tune Nigel Farage does not disappoint his financial capitalist masters.

Since the 2008  Financial crash Nigel Farage has been busy blaming immigrants as contributors to this crisis deflecting blame from his City of London chums who should all be doing prison sentences for fraudulent trading.

Just to churn out more money from his chums Nigel introduced the Aids and Foreigners NHS scare to keep the millions rolling in.

So much for these rank UKIP outsiders with their firm City of London Financial base of support groomed by the BBC. 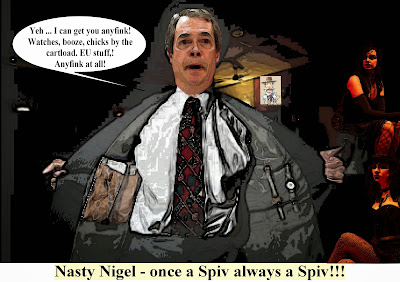