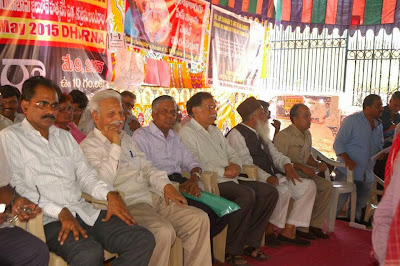 The Dharna was arranged at Indira Park yesterday. It was the first time that Muslim organizations also participated in protest program and raised their voice.

Mr. Varavara Rao told that in the name of economic policies, imperialistic programs are being implemented. On violation of these policies, Governments are making an attempt to prove people anti-public. He bitterly criticized the Govt and said that if any person or organization does not support the Govt., it is treated as anti-national. Similar thing has happened in the case of Prof. Saibaba.

He was raising his voice against the atrocities of the government meted out to the down trodden and the Muslims. He was making an attempt to unite weaker sections and the Muslims but he was imprisoned. Despite the lapse of one year, his bail petition is not being considered. He lamented that Govt. is not hesitating to mislead the judiciary also. He termed Alair encounter an assassination and said that in the entire country, the policies of Israel are being implemented.

He further said that Viqaruddin and his companions were not convicted. They were facing the charges which were not proved yet. There were chances of their getting exonerated by the court. He questioned that who gives instructions to kill the people who are in judicial custody.

He told that the Governments who are playing in the hands of imperialist forces have started misleading the courts also. It is therefore essential that Adivasis, Dalits and the Muslims should come to a common platform and fight for justice.

He also told that many Muslim youths were implicated in Makkah Masjid Bomb Blast Case. He requested the judiciary to call for explanation from the Govt. and the police about the killings of Viqar and his associates.

Addressing the gathering, Maulana Mohammed Naseeruddin demanded unconditional release of Prof. Saibaba and declare total support of Wahdath-e-Islami organization for the struggle for political prisoners. He further told that Mr. Saibaba had invited the attention of the Muslim leaders on the issues pertaining to Kashmiri Muslims. He wanted to create awareness among the Muslims on Muslim issues.

Mr. B. Veeraiah, leader of CPI-ML New Democracy told the imprisonment of Prof Saibaba depicts the anti-people attitude of the Govt.

He lamented that action is being taken against those who are raising voice in support of the victims. CPI leader, Mr. Ram Narasimhaiah told that imperialist and Hindutva forces are bent upon eradicating the freedom of expression.

He further told that more than 20000 Muslims have sacrificed their lives for the freedom struggle of India. The slogan “Bharat Chordo (Quit India)” was also given by a Muslims.

The conspiracy of the governments against the Muslims is condemnable. He also told that after Modi Government assumed power, attacks on Muslims and Christians increased. CPM leader Mr. Ramlu stressed the need for the unity of secular forces against the fascist elements. Mr. Lateef Mohammed Khan, Mr. Rafath Seema and other also addressed the gathering.

It may be noted that Prof. Sai Baba is physically handicapped to the extent of 90%. He is imprisoned in Nagpur Jail. The Human Rights Activists organizations declared that they would continue their struggle till Prof. Saibab is released.

Sad that statements have not come in condemnation of Sababa's arrest by C.P.I.(M.L.) Red Star or C.P.I.(M.L.)(Kanu sanyal) .

I wonder whether they deliberately evaded such a protest.Rahul foundation has also not made an official condemnation.Revolutionary symapthisers should question this.Such an assembly proves that certain features of liberal democracy or bourgeois democracy prevail .Significant was the participation of Muslim organizations.

Even a revisionist party like C.P.I.participated which proves a semi -progressive character in elements out of the revolutionary camp.

In an anti-fascist front such forces participation is crucial.Meetings sympathetic to the Maoist movement are supressed but there are still avenues for liberal protest.

The best example was the suppression of the meeting in Hyderabad last year of the forum of people and the allowing of the dharna yesterday. 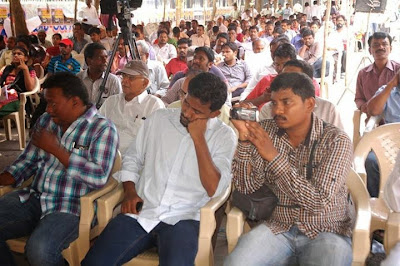