Alexei Mozgovoy by Eddie Dempsey - For A Socialist Novorossiya 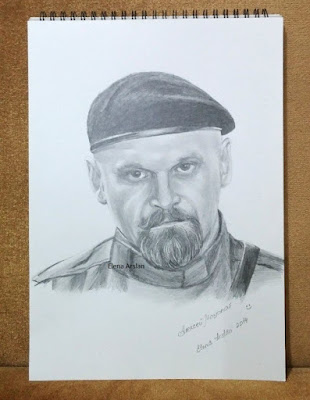 EDDIE DEMPSEY met Ukrainian anti-fascist commander Alexei Mozgovoy just weeks before his death in an ambush. Here, on the day of his funeral, he pays tribute to this remarkable fighter for justice

I MET Alexei Mozgovoy, the charismatic anti-fascist militia leader in rebel-held Donbass in eastern Ukraine a little over two weeks ago. On Saturday he was killed in an ambush, alongside several of his comrades. He was 40.

Commander Mozgovoy had led 3,000 volunteers — incorporating a communist battalion — within his Ghost Brigade, itself a component of the Novorossiya Armed Forces, who have being resisting the so-called Anti-Terrorist Operation of the US/EU-backed Kiev junta for more than a year.

I was visiting Novorossiya — the federation comprising the People’s Republics of Lugansk and Donetsk — as part of an international humanitarian aid convoy organised by Italian musicians Banda Bassotti, stalwarts of the left-wing punk/skinhead music scene for more than 30 years.

Our first day saw Commander Mozgovoy lead a tour of social projects provided by the Ghost Brigade for the population of Alchevsk, one of its strongholds and the town where our 100-strong delegation was based.

We visited a canteen where elderly residents received free meals, followed by a tour of nearby agricultural facilities abandoned by a local fraudster before the crisis.

The Ghost Brigade has commandeered the incomplete buildings and equipment to develop as a collective farm. It is already partially operating and providing food for the population.Such initiatives are vital for the war effort.

In an act of collective punishment Kiev has withheld all pensions and social security payments since the successful independence vote that followed the US-orchestrated coup of February 2014, which deposed Viktor Yanukovych as president of Ukraine.

The rebels view the punitive move to withdraw benefits as de facto recognition by Ukraine’s authorities of their nascent state. Commander Mozgovoy stated: “This is how Kiev wages war — by starving the elderly and poor.”

Our delegation then participated in the Donbass International Forum, held under the slogan: “Anti-Racism — Internationalism — Solidarity,” a conference of Novorossiyan left forces which Commander Mozgovoy was instrumental in convening. Indeed, he was the opening speaker.

The following day, May 9 — celebrated as Victory Day on the territories of the former Soviet Union — he saluted his troops and thousands of locals as they paraded though the streets of Alchevsk, commemorating the 1945 defeat of fascism.

Although not a communist, the commander led communists in battle — most famously in the liberation of the town of Debaltsevo in February this year.

His forces, which had encircled thousands of occupying troops, raised the red flag in triumph following their victory at this vital strategic location.

He earned the respect of his troops and the population with an implacable opposition to oligarchy, demanding the restoration of all wealth stolen from the people since the fall of the Soviet Union and a return to the days of free healthcare and education.

At a commemoration last year marking the anniversary of the Bolshevik revolution he declared his allegiance to the cause of building a “people’s and socialist Novorossiya.”

Born and bred in Lugansk, Commander Mozgovoy’s background exposed claims by Western politicians and their puppets in Kiev that the Novorossiyan resistance is no more than a Russian invasion.

He had seen service in Ukraine’s armed forces and before Kiev launched its war he sang with, and performed as a soloist in, Ukrainian choirs.“Many believe that we are terrorists or representatives of another state, not local militias,” he said.

“We try getting in touch with these people who speak against us, to prove that we really are the people of this region and that we don’t want to fight with them.

We revolted for the ordinary people.”

In a YouTube statement confirming the death of his commander, Alexei Markov, political commissar of the Ghost Brigade and leader of its communist contingent, said

: “A man can be murdered, but not his ideas. And the ideas Alexei Mozgovoy carried over the past year, the ones that brought thousands to join us, will not die.

“We will carry them through the misery of war and with these ideas we will live and build a better life. Unfortunately, the best things our civilisation brings are often achieved through the blood of many brave people, the best people.”

Boris Rozhin, who reports on Ukraine through his popular Colonel Cassad blog, echoed Commissar Markov’s words, likening the life of Commander Mozgovoy with that of Thomas Sankara, president of revolutionary Burkina Faso until his own 1987 assassination, accomplished through the connivance of French intelligence.

In tribute he wrote: “When Sankara was murdered, the perpetrators expected that he, like many other African freedom fighters, would disappear like a ridiculous ripple that shook the world of exploitation and profit.

“But time demonstrated that people like that depart to immortality, becoming moral and ethical compasses for future generations. “They represent the will of humanity for justice and equality and inspire more and more new fighters for justice to replace those who fell in the struggle for it.”
A fine eulogy for Commander Mozgovoy..

Yet the most fitting final epitaph is to be found in the motto of his own Ghost Brigade — the mission statement for which he sacrificed his life: “Peace and justice for the working people of the Donbass.”Towards this precious goal his comrades will continue their late commander’s struggle. No pasaran.