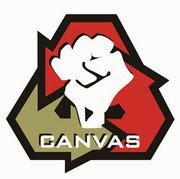 Otpor (means “resistance” in Serbian) was founded in October of 1998 at the University of Belgrade. At first it was a student protest group (mainly concerned with Milosevic’s repressive media and university laws), but quickly expanded into a national underground resistance movement during the 2000 Presidential elections. Many of its members were arrested in 2000 in the run-up to the elections, Milosevic branded them terrorists. This all backfired as most of Otpor members were young students from the university.

Otpor first tried to brand itself as an anti-corruption NGO, while some of its members went into politics (such as Srdja Popovic, who won a seat in the Parliament in 2000 and was an environmental advisor to the Djindjic government). They finally reconstituted themselves as a political party in 2003, but failed miserably to attract any votes.

CANVAS (http://www.canvasopedia.org/) is a spin-off of Otpor and was founded by Srdja Popovic and Ivan Marovic in late 2003 after Srdja Popovic left the Djindjic government (who was assassinated in March 2003). They have been involved with numerous pro-democracy movements around the world (most effectively in Ukraine and Georgia, but they were also in Belarus, Venezuela, Zimbabwe, Iran, Lebanon, Azerbaijan and Tibet). They use Gene Sharp’s non-violence theory and give it their own spin (to check out their manual on non-violence, go here: http://www.canvasopedia.org/content/weaponry/intro.htm)

They are supported by the Albert Einstein Institution (founded by Gene Sharp), Democracy Research Guide, International Center on Nonviolent Conflict Resources, International Republican Institute and the National Democratic Institute for International Affairs. They may have also received CIA funding and training during the 1999/2000 anti-Milosevic struggle. The piece we did on them last fall is attached at the end of the document.

What they want from us: Canvas appreciates the media attention. The article we did on them in October 2007 definitely pleased them (so much so that it was prominently displayed on their own website for a while). They may be looking for more of this.

What we can get from them: They would be a great source of contacts. They have met with most of the active student anti-regime organizations that matter. They could furnish us with contacts and introductions that we could tap whenever we need timely information. As a source themselves, CANVAS probably does not have the ability to provide us with on the spot information (except maybe on Serbia). They can offer their opinion and analysis, but they are much more valuable as a source of contacts. We can also get a better picture of who in the US funds these types of groups.

Srdja is a native of Belgrade, son of a prominent TV reported and a popular news anchor on state television. His main responsibilities in Otpor (which he was a founding member of) were human resources and training. He studied Gene Sharp’s works at the university, so he translated his texts and put them into practice. His main field of study was biology. He is considered the brainchild of the anti-Milosevic non-violent revolution in Serbia. He mostly worked behind the scenes of Otpor, writing speeches and manuals (most of the texts on CANVAS’s website are his writing). After he became an MP in 2000 with the Djindjic government he became an environmental advisor.

Was also the founder of an environmental NGO called the “Green Fist”.

One of the main trainers of Canvas, also an ex-Otpor member. He was directly involved in the training of the Georgian and Ukrainian anti-government student groups. Has also been quoted numerous times by Western media in relation to Canvas/Otpor international activities.

Has once stated that Otpor did receive CIA funding.

Also an ex-Otpor member, he was very active in the run-up to the Georgian revolution. He is also the founder and President of Mediaworks, a Belgrade based IT company that immediately following the defeat of Slobodan Milosevic received very profitable frequency permits from the government.

According to some Belgrade sources he was the main link to a lot of the US funding, especially with the International Republican Institute.

thnx for the information..
blog is really gud,Help my india is the World Best Forum and Blogging Site which provides the all category of forum and blogging and Social Community site.

Among 6 statements about me, 3 are totaly not true
1. One of the main trainers of Canvas (CANVAS does not have more or less important trainers, so I can't be main one)
2. He was directly involved in the training of the Georgian anti-government student groups (I wasn't)
3. Has once stated that Otpor did receive CIA funding (never stated this stupidity)
Best
Sinisa