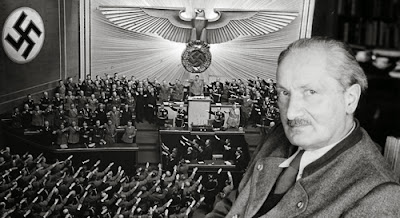 Democracy and Class Struggle  is continuing our investigation into Eco-Fascism and the Green Nazis and we are publishing this article from 2011 from Mark Musser.

Mark Musser unlike J.Sakai whose recent contribution on Green Nazis we have just published here is not on the revolutionary left but has been a Christian Missionary in the former Soviet Union and hence an unlikely  source for publication on Democracy and Class Struggle.

For many years we have had problem with comrade Jean Paul Sartre and his embrace of Existentialism, even if his view of it was not entirely Heidggerian.

The Nazi Existentialism of Heidgger was the nearest thing to a philosopny of Nazi National Socialism and supplanted the earlier Fascist "Actualism" of Giovanni Gentile and has a subversive influence on a whole range of "Left" intellectuals particularly French Post Modernist ones in the post Second World War World.

This article addresses the very important issue of Ecology and Martin Heidegger has we are very concerned that the Ecological Movement is being subverted by Corporate capitalist interests and agree with the theses of  Tadzio Mueller and Alexis Passadakis that :

"This isn’t the 1930s. Then, under the pressure of powerful social movements, the old ‘New Deal’ redistributed power and wealth downwards.

The ‘New New’ and ‘Green New Deal’ discussed by Obama, green parties all around the world, and even some multinationals is more about welfare for corporations than for people".

Our interest in environmental questions is a practical one and is based on community needs and not corporate greed and has part of our practical politics we have come up against Greens acting as shock troops for Corporates completely indifferent to the views of local communities who may object to short short term technical fixes for capitalism's problems - they are literally bulldozered over.

Whilst we support the development of Eco Socialism has outlined here by Asit Das and subscribe to the 20 Theses against Green Capitalism of Tadzio Mueller and Alexis Passadakis we are aware there are others in the Green Movement who will adopt Heideggian violence against us to achieve their "pure" nature.

One of the most influential philosophers of the 20th century, foundational to the academic left and deep ecology of the greens, was committed to Nazism.
The green Nazi/deep ecology connection in the life and works of Martin Heidegger have been routinely given a pass over the years by many western scholars who love his existential philosophy.

According to French professor Emmanuel Faye’s latest book on Heidegger, the days of viewing his commitment to Nazism as something incidental to his life are now officially over.
In his  book Heidegger: The Introduction of Nazism into Philosophy in Light of the Unpublished Seminars 1933-35, French Professor Emmanuel Faye has exposed the real Martin Heidegger (1889-1976).

Western scholars have been so enamored with his existentialist philosophy that it has been very difficult for them to accept the fact that he was a real Nazi.  Too many have been more than willing to overlook his Nazi past as something incidental to his worldview.
Environmental historians have been quick to cover for Heidegger because he is such a critical figure in modern green philosophy.  Many of his views are consistent with what is today called deep ecology.

Heidegger is known among environmental thinkers for later advocating an anti-technology “let it be” attitude toward nature after his so-called ‘turning’ from National Socialism.

However, Faye clearly shows that Heidegger’s ‘turning’ from National Socialism is a modern myth built on outright lies and the later redaction of his earlier materials hidden under dense language and opaque existentialism.

Martin Heidegger is an unrepentant Nazi.  Even years after the war, he spoke of the “inner truth and greatness” of National Socialism.
The idea that Heidegger temporarily strayed into Nazism only to recover himself later with a much more mature philosophy is simply untenable.

According to Faye, it is far more likely that Heidegger managed to infiltrate much of the post-modern world with a more developed Nazi political ‘philosophy.’

Although Faye does not discuss in detail the environmental leanings of Martin Heidegger, his brand of green existentialism is much more at the heart of the issue than most people realize.  Heidegger has certainly hidden some of his Nazism in the modern green movement.
Existentialism is fertile ground from which to develop a deep ecological worldview.  Existentialism often uses natural existence or ‘being’ to trump idealistic or religious thought that heightens itself above the natural world.

Nature and its holistic interrelatedness is used to neutralize both philosophy and religious faith as incongruent to the existential realities of the real world.

This also allegedly leads to a false, dominating view over nature, which has become especially superficial and unsustainable in the modern mechanized world.  Truth is not a matter of abstract doctrinal statements that unnaturally detaches people from the real world, but is self-defined according to one’s own natural existence rooted in his particular environment.
For Heidegger, what needs to be done is to destroy western philosophy and its Judeo-Christian handmaid. Even after the war, Heidegger’s philosophy was aimed point blank at the overthrow of traditional western philosophy/religion in order to save the planet.  With its transcendental emphasis upon mind, thinking and thought, both western philosophy and the Judeo-Christian worldview elevate ‘rootless’ rationalism and/or faith over the reality of natural existence.  As far as Heidegger was concerned, this has led modern, western man into an inauthentic lifestyle contrary to the natural world grounded in what Heidegger calls ‘being.’
The main thrust of Heidegger’s thought is thus to reduce all metaphysics or philosophy to the question of ‘being’ or existence, particularly German ‘being.’  In so doing, western man’s alienating and destructive dominance over nature can be arrested.  Indeed, Heidegger went so far as to say that the motorization of theWehrmacht in Nazi Germany’s victory of France in 1940 was a “metaphysical act.”

This, of course, reduces philosophy to the realm of politics and power – the epitome of Nazi existentialism.  Nazi Germany’s conquest over France represented the victory of National Socialist ideology over the international values of the French Enlightenment that exaggerated human reason over Nature.
Heidegger is also important in understanding the ideological basis for Nazi technology even though National Socialism was a secular religion of nature.

Martin Heidegger did not become anti-technology per se until after the war when the Allies were in charge of the atom bomb.  In the 1920’s and 30’s he spoke of the ‘natural powers’ of German technology that grows out of and is limited by Nature.

He thus believed in an Aryan sustainable technology rooted in the soil of Germany.  Technology based on the globalist forces of the Enlightenment is inauthentic and locally destructive to the native German peoples (das volk) since it has been uprooted by the ‘liberal’ Jewification of society.
That modern environmentalism has swept in behind the collapse of classic western philosophy and the fading of the Judeo-Christian worldview is thus no accident.  It is part and parcel of the whole post-modern outlook that denies any transcendental truth or God that exists independent and outside of the natural world.  Without such transcendental truths, all that is left is an amoral nature and its factual existence, and Martin Heidegger has been leading this particular charge since his early days in the camp of National Socialism.
Although Heidegger did not join the Nazi Party until 1933, he was very supportive of the movement from its inception.  Heidegger’s wife, Elfride, was a Nazi enthusiast going back as far as the early 1920’s.  She was very involved in the naturist Nazi Youth groups of the time.  With inheritance money, she also purchased Heidegger’s chalet in the upper reaches of the Black Forest called  Todtnauberg.

The chalet had beautiful nearby valley views topped off by the Alps in the distance.  From this very chalet would come the inspiration for much of Heidegger’s green existentialism.  Ironically enough, Todtnauberg means “mountain of death.”  In 1934, Heidegger signed an environmental petition called the “German Landscape in Peril.”  Other Nazi greens who signed the petition included Paul Schultze-Naumburg, Walther Schoenichen, Hans Schwenkel, Konrad Guenther, Werner Haverbeck, and Fritz Todt.  In those days, many German greens got caught up in what was called the Nazi “blood and soil” ideology developed by Himmler’s SS where German blood rooted in German soil became the basis for protecting the homeland (Heimat) – culturally, militarily and environmentally.
Former students of Heidegger also confirmed that he was a Nazi blood and soil environmental enthusiast throughout the much of the 1920’s.  Heidegger bragged about the Nazi naturist youth movement as one of the keys to a successful future.  Heidegger also believed that universal reason as practiced by modern philosophy since the Renaissance is contrary to the existential realities of blood and soil.  Another student claimed that Heidegger was convinced that only a National Socialism dictatorship could oppose Marxism properly.

Heidegger advocated that violence, if not liquidation and assassination, against opponents was an acceptable solution to political problems.

He openly proclaimed the Fuhrer principle, German racism and eugenics, Nazi collectivism, and was even promoted as rector to the University of Freiburg when Jewish professors were forcibly removed from their posts.  He was also anti-Semitic.  He considered the Jews in the East unnatural nomads unworthy of their living space (lebensraum).  Shockingly, many dead German soldiers on the battlefields of the Second World War possessed Heidegger’s books in their rucksacks.  Heidegger also proclaimed that the people of Germany should have an ‘erotic’ love for the Nazi state.
In June of 1933, Heidegger gave a speech at the Freiburg university stadium when a symbolic bonfire of un-German like books were burned.  Even much of his later existentialism was specifically designed to do away with all inauthentic thought that elevated itself above its own natural environs.  The antipathy that radical greens have toward the foundations of modern culture – whetherly religiously, philosophically, or even economically – has become increasingly perilious.  What is worse?  Burning books or tearing down dams and choking off energy supplies and burning corn in cars?  The latter may turn out to be far worse than the former if continued unchecked.
More than a few environmental historians have pointed out that since Heidegger did not believe in biological racism, he cannot be considered a genuine Nazi.

Faye, however, strongly points out that in place of a fundamentalist view of Nazi blood, Heidegger taught a racial rootedness in the German soil that was ontologically or existentially based rather than biologically based.

This ontological en-rootedness only deepens the issues further.  It provides a philosophical justification for German racism without it being tied to the fundamentalism of Nazi scientism.

This, in turn, provides a broader foundation for Nazi doctrines to rest upon, pollinate and grow.  That such nuances have been used by scholars to disassociate Heidegger from National Socialism needs to be corrected and abandoned.

Heidegger’s fascism is built on environmental existentialism rather than biological scientism. Indeed, in his Heidelberg courses he enlightened his audiences by saying that, “the Fatherland is being itself.”
This article was originally published in American Thinker, 7/10/2011
Posted by nickglais on 12/07/2013 12:03:00 PM