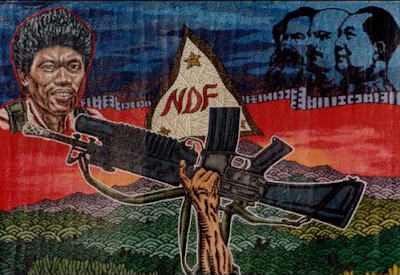 The US-Aquino regime is as rotten as the system it represents... With worsening hunger and poverty inflicted by the regime, workers and the toiling masses are as determined as ever to advance the revolution to a new and higher level.

To kick off their commemoration of the 45th anniversary of the re-establishment of the Communist Party of the Philippines (CPP), revolutionary workers led by the Revolutionary Council of Trade Unions (RCTU) held a lightning rally along the worker and urban poor communities in Baclaran, Paranaque City this morning.

“With utmost joy, workers join the Filipino people in celebrating the 45th anniversary of the re-establishment their Party, the CPP. For 45 years, the CPP has victoriously led the Filipino workers and people in the struggle for freedom, democracy and social change against foreign and domestic exploitation,” stated Juan de Mayo, RCTU spokesperson.

As they celebrate the CPP’s anniversary, the revolutionary workers vowed to intensify their struggle against the US-Aquino regime which they say represents those who rule the country – the imperialists, comprador bourgeoisie and landlords.

“The US-Aquino regime is as rotten as the system it represents. It has exposed itself to be no different from previous puppet, corrupt and anti-people regimes. In Aquino’s three years in power, he has defended the crisis-wracked semi-colonial and semi-feudal system that has subjected Filipino workers and people to the worst forms of exploitation and oppression,” de Mayo said.

The RCTU warned that Aquino will face an upsurge of unionization by workers as well as workers’ strikes, protests and intensified armed resistance in his remaining years in power as the revolutionary forces persevere in advancing the national-democratic revolution.

“With worsening hunger and poverty inflicted by the US-Aquino regime, workers and the toiling masses of the Filipino people are as determined as ever to advance the revolution to a new and higher level. Aquino’s next years in power will be faced with an upsurge of workers’ revolutionary struggle against his anti-worker and anti-people regime,” de Mayo said.

Meanwhile, the RCTU encouraged fellow workers and urban poor to persevere in advancing the people’s democratic revolution by taking part in the armed struggle in the countryside and join the ranks of the New People’s Army (NPA).

“If history has taught us one thing, it is that only through armed revolution can we achieve victory over foreign domination and control. Only by taking up arms can we bring down despotic and oppressive regimes. That is why we call on all workers and our fellow toiling masses to take part in the armed struggle being waged by the NPA,” de Mayo said.

The Communist Party of the Philippines was re-established on December 26, 1968 and has since then been at the forefront of the Filipino people’s struggle for national freedom, democracy and socialism.

* The Revolutionary Council of Trade Unions is an allied organization of the National Democratic Front of the Philippines.