Wales and First World War by Nickglais : Part 1 - Northcliffe's editorship of the Daily Mail in the run-up to the First World War, when the paper displayed "a virulent anti-German sentiment", led The Star to declare, "Next to the Kaiser, Lord Northcliffe has done more than any living man to bring about the war."

Now that were are approaching 2014 the 100th anniversary of the First World War we will publish a series of articles highlighting aspects of the First World War with reference to Wales, that still impact our lives in some way today, and we are starting with the mass media and Alfred Harmsworth - Lord Northcliffe and his contribution to the Imperialist mindset in British Isles and Wales.

After the signing of the Entente Cordiale in 1904 between Britain and France, attitudes towards Germany and German residents in Britain changed for the worse..

A fear of German militarism replaced a previous admiration for German culture and literature. Authors and journalists  produced a stream of articles on the threat posed by Germany at the behest of Alfred Harmsworth for the Daily Mail.

In 1894 Alfred Harmsworth had commissioned author William Le Queux to write the serial novel The Great War in England in 1897, which featured Germany, France and Russia combining forces to crush Britain.

In 1897 Alfred Harmsworth had also sent the writer G. W. Steevens to Germany to produce a sixteen-part series entitled Under the Iron Heel. The articles praised the German Army and warned that Britain was in danger of being defeated in a war against Germany.

In October 1909 Northcliffe employed Robert Blatchford, the Socialist editor of the Clarion, to visit Germany to write a series of articles on the dangers that the Germans posed to Britain.

Northcliffe's choice of a socialist showed how perceptive he was has, socialists were declared anti war in the Second International, and Blatchford the author of Merrie England a socialist book that had sold two million copies in Britain was used by Northcliffe to help develop Social Imperialism  (Socialist in words Imperialists in deeds)  in Britain during the First World War has the ideology of the British Labour Party.

Blatchford agreed with Northcliffe on the problem and in one article wrote: "I believe that Germany is deliberately preparing to destroy the British Empire" and warned that Britain needed to spend more money in defending itself against attack.

The result was the bestselling The Invasion of 1910, which originally appeared in serial form in the  Daily Mail in 1906 and has been referred to by historians as inducing an atmosphere of paranoia, mass hysteria and Germanophobia that would climax in the Naval Scare of 1908–09.

Nothing more exemplifies the state of anti German hysteria in Britain whipped up by Lord Northcliffe  than British attitudes even to animals thought to be German during the First World War, the dachshund dog, being a prime example.

The writer Graham Greene in his memoirs recalls dachshund dogs being attacked in his home town during First World War.

James Hayward, the author of Myths and Legends of the First World War (2002) has pointed out: “Famously, dachshund dogs (although not apparently Alsatians) were put to sleep or attacked in the streets, a persecution which endured so long that in the years following the war the bloodline had to be replenished with foreign stock.”

It was against this background of anti German hysteria that the First World war was launched.

To get a flavour of how people thought about the First World War in Wales in 1914 here is the recollection of Frank Richards on August 4th 1914.

"On the 4th August 1914 ,I was in Blaina Monmouthshire having a drink in the Castle Hotel with a few of my old cronies , all of them old soldiers and most of the reservists.

One had took us around South Africa and there wasn't a Boer left in South Africa by the time he had finished his yarn.

Next I took them around Burma and India and there wasn't a Pathan or Dacoit left in the world by the time I had finished mine.

Now another was taking us through North China and the Boxer Rising of 1900 and he had already got hundreds of chinks hanging from gas brackets when some one came in with a piece of news, he said that War had broken out with Germany."

Wales had the British Imperialist mentality in bucketloads in 1914 and with appeals to defend little Belgium in Britain by Lloyd George emotions were running high .

Therefore it should come as no surprise that in Wales 13.77% of the population of Wales enlisted to fight in First World War.

All told 280,000 people out of a Welsh population of two and half million participated in the First World War. 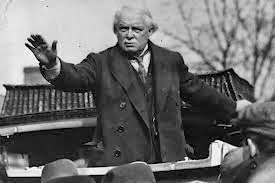 Why were so many Welsh People prepared to die for another country but never fought for their own ?  part of the answer lies in Lloyd George and his demagogic oratory but the Imperialist mindset in Wales has even earlier roots than Lord Northcliffe and Lloyd George and the names of some Welsh streets still reveal it with their Sebastapol terraces reflecting  how Wales rallied to the British Flag during the Crimean War in the 1850's.

However the origins of the British Empire in the 18th Century not only found Scots wanting to participate in Empire but also the London Welsh in the Cymmrodorion.

Therefore 1914 exposes much about Welsh Society that continues to this day but there were a very small number of individuals in Wales who stood out against the First World War and we will address their insights about Wales and their contributions in Part 2 of this article.